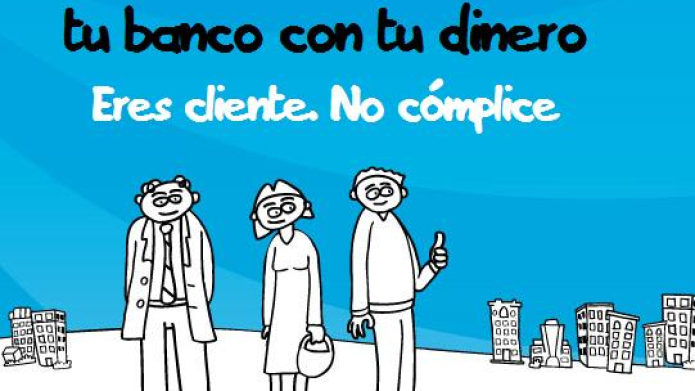 Next Friday the 30th, in Santander (Cantabria), SETEM, Centre Delàs of Peace and Justice Studies and ODG, members of the campaign "Banco Santander without weapons", will denounce the Board of Shareholders of the Banco Santander for being the second Spanish financial institution with largest investments in the arms industry, and because the Banco Santander's corporate policy on human rights and social responsibilities are incoherent with its actual activities.

The entities promoting the campaign "Banco Santader without weapons" and "Banca Limpia" will take part for the fourth year in the General Assembly of Shareholders of Banco Santander thanks to their 222,989 delegated shares, and will prove before the Banco Santander Board of Directors and their shareholders the relationship between the Spanish bank and the production and selling of arms around the world, such as warships, bombs, rockets, torpedoes, missiles, fuel and military explosives.

This year, "Banco Santander without weapons" has reported that Banco Santander has contributed with more than 1,000 million€ over the last ten years to the production and selling of arms. Thus, Mr. Emilio Botín will be given the (dis)Honour Diploma for being the President of the second financial institution in the rank of the Spanish armed banks.

Despite the dialogue set by "Santander without wapons" and "Banca Limpia" towards the Banco Santander, its internal policy of finances is clearly insufficient since it merely restricts the arms already forbidden by the existing legislation (related to nuclear weapons, cluster bombs and depleted uranium weapons), without forbidding other arms directly responsible of human rights' violations and of millions of deaths caused by armed conflicts and wars around the world.

A representative of the MAB (Movimiento de afectados por las represas de Brasil) will report the human rights' violations and the severe social and environmental impacts caused by the intervention of Banco Santander in one of the countries with richest biodiversity, and territory of the indigenous peoples, in the middle of Amazonia, through financing the dam of Santo Antonio, despite the fact the Permanent Peoples' Tribunal condemned this project it and that, since 2008, Setem has called for the Bank to withdraw this tragic investment.

These facts, revealed today by the "Banco Santander without weapons" campaign, prove the great incoherence of this bank regarding the corporative policy on human rights and environment, as well as regarding the voluntary proposals of Corporative Social Responsibility this bank is attached to, confronted with the actual practices.

The three entities have recently launched the website www.bancaarmada.org  where the relation between Banco Santander and many other Spanish financial institutions with the arms industry and other controversial sectors has been condemned. This website also includes the ranking of the armed banks in Spain.