For inquiries, please contact (for mobile phone – Whatsapp/Signal only): 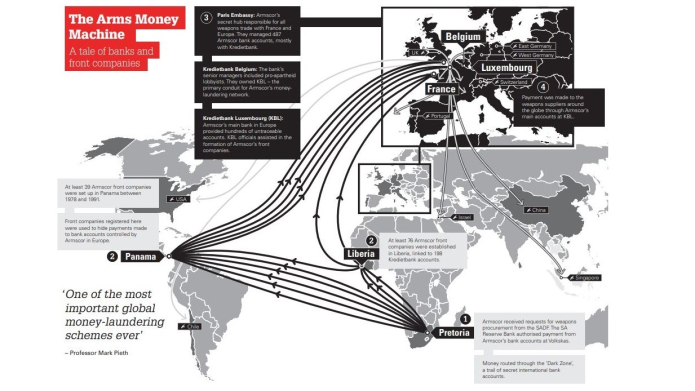 New evidence shows that two European banks were at the centre of the apartheid era international arms money laundering machinery. For nearly two decades, Belgium’s Kredietbank and its subsidiary in Luxembourg (KBL) were responsible for facilitating up to 70% of all illegal arms transactions that allowed the apartheid government to secretly buy weapons despite mandatory UN arms sanctions. These and other banks have never been held accountable for what a leading international bribery expert describes as ‘one of the most important global money-laundering schemes ever.’

In the face of widespread impunity, can these financial giants be held to account?

Open Secrets in partnership with the Centre for Applied Legal Studies (CALS) are bringing the fight for accountability for South Africa’s historic economic crimes to Europe using international accountability frameworks. The complaint is against two major European banks - Belgium’s Kredietbank (now known as the KBC Group) and its subsidiary in Luxembourg (KBL) in terms of the OECD Guidelines for Multinational Enterprises.

The conduct of these banks exemplifies impunity amongst private actors who collaborated with the apartheid regime. It also shines a spotlight on similar contemporary practices involving major financial institutions that continue to undermine human rights across the globe.

The Organisation for Economic Co-operation and Development (OECD) provides one of the few international mechanisms available to hold businesses accountable for their role in human rights abuses. The OECD has various contact points in member countries that are responsible for ensuring that multinational enterprises operating in their jurisdictions comply with the business operations and accountability standards set out in the OECD Guidelines. Open Secrets and CALS will be laying the OECD complaint at the banks’ doorstep by approaching the Belgium and Luxembourg National Contact Points.

As a courtesy both banks also be served a physical copy of the complaint.

Representatives from both Open Secrets and CALS will be in Europe to launch the OECD complaint and hold media briefings on the following dates: