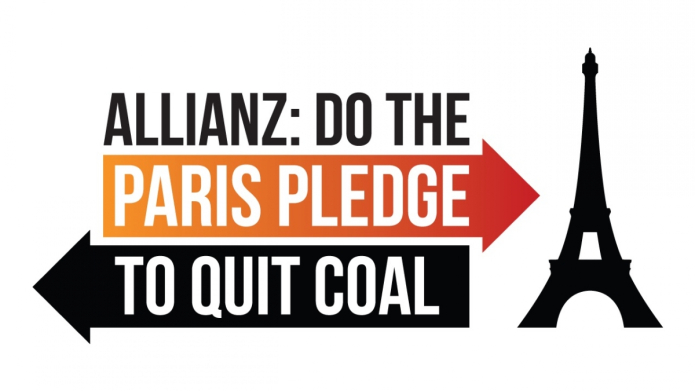 This morning, the world's largest insurance company, Allianz, announced its decision to undertake a major divestment action from the coal sector. In reaction to a campaign by the German environment organization, urgewald, Allianz stated it will divest shares of mining companies that derive over 30% of their revenues from coal and divest shares of utilities that produce over 30% of their power through firing coal. The Munich-based insurer will also phase out its bond investments in these companies. According to Allianz, the divestment action will amount to 4 billion €.

"This is incredibly good news for our climate and much bigger than the divestment action taken by AXA," says Heffa Schücking, director of urgewald. Based on a threshold of 50%, the French insurer AXA announced the divestment of around 500 million € from the coal industry last May. "If well-implemented, Allianz's divestment action sets a new standard for insurance companies and asset managers all over the world," adds Schücking. "

"We are glad that first the Norwegian Parliament and now the board of Allianz is convinced of our divestment approach. Climate-oriented divestment requires threshold values not only for the turnover, but also for the production of electricity. This hits both the mine operators as well as coal-based utilities like RWE and Vattenfall, "says Schücking.

Over the past months, urgewald has been calling on Deutsche Bank and Allianz to make a ‘Pledge for Paris' as these two institutions are Germany's largest investors in the global coal industry. "Allianz has shown it is willing to step up and take action for our climate. Now it's time for Deutsche Bank to move," says urgewald divestment campaigner, Kathrin Petz. In order to make sure Deutsche Bank gets the message, urgewald activists delivered 7,000 petitions and dumped several wheelbarrows full of coal at the bank's Frankfurt headquarters this morning.