Home › News
A letter to Mark Carney - we are running out of time
90+ environmental groups tell Mark Carney in ads in Financial Times & Toronto Star: "You must not let the finance sector fund the expansion of the fossil fuel industry"
By: Stand.earth
2021-10-07 Share this page: 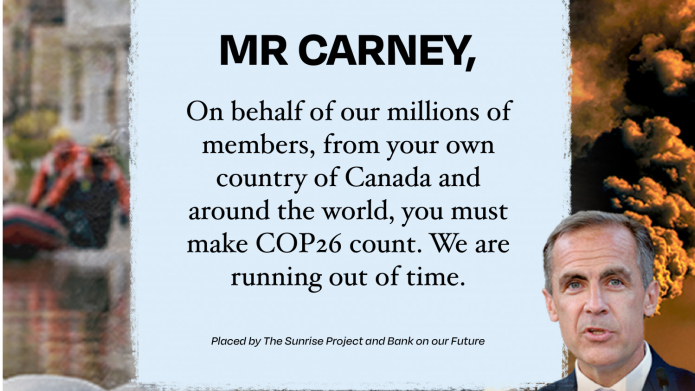 On the eve of the COP 26 climate meetings, where private finance's role in climate change will finally get the attention it deserves, we urge you to seriously strengthen the guidelines of the Glasgow Financial Alliance for Net Zero (GFANZ).

While we applaud your role in establishing frameworks to help green the financial system, we are growing increasingly concerned that banks and other financial institutions are using “Net Zero” promises largely as greenwash. As one senior finance figure remarked recently, it’s easy for bosses to commit to net zero because it is “next, next, next, next management’s problem”. Unless the ambition of Net Zero alliances and the bar for entry is significantly raised, they risk just becoming yet another exercise in empty green PR while global financed emissions continue to rise.

A global consensus - driven by the International Energy Agency’s Net Zero Emissions Scenario, cited by the UN Secretary General - is solidifying: to meet the goals of the Paris Agreement, there is no room for any further fossil fuel development. No more coal, oil, or gas expansion are permitted if we are to limit global temperature rise to 1.5°C.

Yet many of the financial institutions who have signed onto the GFANZ remain among the world’s top backers of fossil fuels. The majority of signatories have submitted no detailed plans to reduce their fossil fuel investments; they lack measurable interim targets for emissions reductions, and do not rule out reliance on discredited offsetting schemes and other unproven carbon dioxide removal technologies. In fact, many financial institutions, since becoming members of GFANZ, have issued new financing to companies expanding fossil fuel infrastructure.

Financial institutions that take their role in the climate crisis seriously must:

This is the true gold standard. Anything short of it will be seen as a failure in your duties. On behalf of our millions of members, from your own country of Canada and around the world, we urge you to raise the ambition of financial institutions on climate action and not allow them to receive positive accolades for minimal, ambiguous, or false promises. We are running out of time.

Images of the ads running in prominent newspapers: