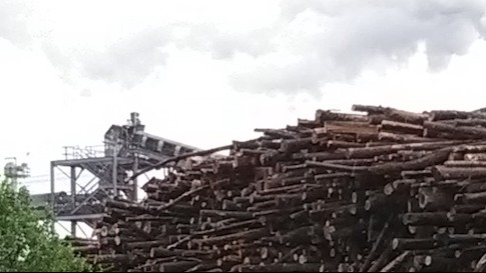 Over 120 groups from about 30 different countries have signed the position statement “The Biomass Delusion”, declaring the use of forest biomass for renewable energy to be a false solution for climate change mitigation. The broad NGO coalition, which includes organizations such as Greenpeace, NRDC, BankTrack and the Federation of Community Forest Users in Nepal, calls for an end to all finance, subsidies and policy support for large scale bioenergy.

“The Biomass Delusion” statement is released on the campaign day of the bioenergy industry promoting the burning of more wood, and just a couple of weeks after the release of the latest, hard hitting and sobering IPCC report on global warming of 1.5 degrees. The statement stresses that the large scale burning of forests to produce energy harms the climate, the forests, the people and the clean energy transition, and it highlights the importance of forests in the task of limiting the temperature increase.

Due to these strongly negative and adverse impacts, investing in biomass poses serious legislative, financial, reputational and climate risk to financiers.

Legislative Risk – The growing awareness about the negative impacts of burning biomass, including the fact that it emits more CO2eq than coal per unit of energy, will inevitably force lawmakers to abolish any forms of subsidies to this sector. Last August, the UK government already made a first step in this direction, implementing restrictions on subsidies for biomass. Without subsidies, the economic viability of these companies is questionable, and this is a risk for its financiers.

Climate Risk - Burning woody biomass actually contributes to climate change by increasing emissions and by destroying sinks. This will have a direct impact on the industry itself. Changes in the climate can affect water availability, which has direct impacts on the productivity of forests and plantations. Warmer weather also make plantations and forests more vulnerable to wildfires, which can lead to hundreds of thousands of hectares to go up in smoke, as has happened in recent years in Indonesia, Chile and Portugal. This causes serious financial losses, not to speak of the impacts on people’s lives, biodiversity and again, the climate.

Reputation Risk – The public will increasingly call out the industry and its financiers for their misleading messaging on biomass as a sustainable solution. Protests by affected communities, campaigners and scientists will increase, as this industry is destroying the most effective proven tool to extract carbon from the atmosphere: forests. The financiers of the sector can be perceived as being involved in greenwashing or even as causing direct harm to the climate.

Financial Risk –The increasing public protests against the burning of woody biomass will lower the demand for this form of energy, and thus the financial returns. In addition, legislative changes will reduce the subsidies allocated to the biomass sector and combined this will significantly impact the profitability of the sector.

“Forest biomass is a lose, lose, lose, lose proposition that has prompted this strong statement of concern from such multitude of groups. We appeal to policy makers, financiers, the markets and consumers to abandon support for large scale energy production from the forests.” said Peg Putt, the working group coordinator of the Environmental Paper Network which has organised the statement.

Full statement and its signatories: http://environmentalpaper.org/the-biomass-delusion/