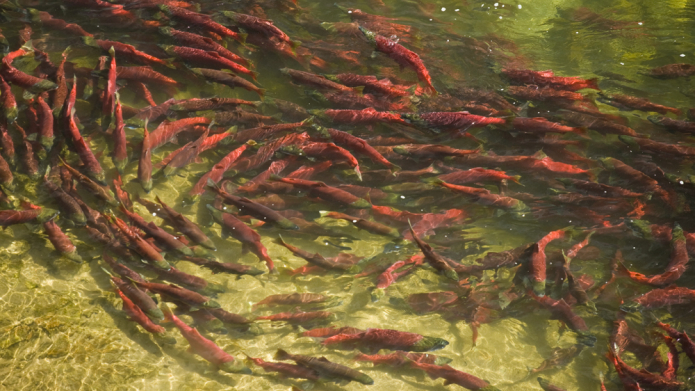 About Pebble gold-copper mine

Anglo American and its Canadian partner Northern Dynasty formed the Pebble Limited Partnership in 2007 to develop a massive copper and gold mine - the Pebble Project - in southwest Alaska.  The mine is proposed for development within a Fishery Reserve at the headwaters of Alaska's Bristol Bay watershed - which supports the world's largest remaining wild sockeye salmon fishery, and generates roughly 30-50% of the world's commercial supply of wild sockeye salmon.

Based on current ore projections of 10.78 billion tons, the Pebble Mine is projected to be the largest mine in North America, and generate up to 10 billion tons of mine waste (tailings). Final plans have not been submitted, however the company submitted plans in 2006 which called  for tailings dams over 700 feet high, and larger than the world's largest concrete dam - the Three Gorges dam in China - to store 2.5 billion tons of tailings.  Since then, ore projections have triped - from 2.5 billion to 10.78 billion tons - requiring three times the storage capacity.

There is no existing infrastructure in the Bristol Bay watershed.  Mine development will require the construction of:

The Pebble Project is proposed for development in the Bristol Bay Fishery Reserve at the headwaters of the Bristol Bay watershed - which supports the world's largest remaining wild sockeye salmon fishery. According to current ore estimates, the proposed mine would generate up to 10 billion tons of reactive mine waste, containing toxic by-products that would be stored in perpetuity at the headwaters of this invaluable fishery. Excavation of the ore deposit and long-term disposal of mine waste would destroy currently productive salmon habitat. The mine is overwhelmingly opposed by Bristol Bay residents (roughly 80% according to the latest survey), including Indigenous communities.  Financial institutions should not provide funding via corporate loans or project financing for this project.

Opposition to the Pebble Mine centers around the threat to the Bristol Bay salmon fishery, which is the economic, social and ecological backbone of the region - generating $400 million in annual revenue, employing more than 5,500 FTE people and supporting the subsistence livelihoods of the local communities throughout Bristol Bay.  Athabaskan, Aleut and Yu'pik Eskimo peoples have relied on the salmon runs for subsistence for thousands of year, and salmon is still the primary source of food for these communities, comprising 60-80% of their total subsistence harvest.

The project is vigorously opposed by a diverse set of regional stakeholders, including:

The Pebble Project is located in a Fishery Reserve at the headwaters of the Bristol Bay watershed, which supports the world's largest remaining wild sockeye salmon fishery and generates roughly 30-50% of the world's commercial supply of wild sockeye salmon.  Scientists consider the salmon stocks of Bristol Bay to be globally significant and a top priority for conservation.  Development of  the Pebble Mine is a direct threat to this internationally significant fishery.

Destruction of Salmon Habitat
The footprint of the mine is estimated to cover 15 square miles.  Independent fisheries biologists contracted by the Nature Conservancy to survey salmon streams in the proposed mine area, found salmon habitat throughout the mine area, including directly above the ore deposit. The researchers concluded in a  2009 report that, "Our findings remove any doubt that the construction of a mine will destroy salmon and salmon rearing habitat."

Acid Mine Drainage
Based on current ore estimates of 10.78 billion tons, the mine is projected to generate 10 billion tons of mine waste (tailings) which the company proposes to store behind large earthen dams at the headwaters of Bristol Bay in perpetuity.  Due to the high concentration of sulfides in the Pebble deposit, the majority of rock is "reactive" or acid-generating rock. Acid mine drainage is considered the greatest environmental liability associated with mining. When the ore is excavated, and the sulfides in the rock are exposed to air and water, they react to form sulfuric acid that can increase metals and other pollutants downstream. A 2006 study of hardrock mines found that 93% of mines with the same characteristics as Pebble - high acid generating potential and close proximity to surface and groundwater - resulted in water pollution. This has serious implications for the salmon fishery.  Research shows that miniscule chanages in copper concentrations in the water (as low as 2 - 10 parts per billion (micrograms per liter)) can alter the salmon's ability to migrate.

Dewatering
The company has projected the need for 35 billion gallons (1.1 billion liters) of water per year from salmon streams for mine activities.  A 2007 report has identified this as a serious threat to the salmon fishery.

Athabaskan, Aleut and Yu'pik Eskimo peoples have relied on the Bristol Bay salmon runs for subsistence for thousands of year, and salmon is still the primary source of food for these communities, comprising 60-80% of their total subsistence harvest. The proposed Pebble Project is vigorously opposed by indigenous people in the region, including the Bristol Bay Native Corporation (which represents 8,500 shareholders), Nunamta Aulukestai (an association of nine Native Village corproations), and the Alaska Intertribal Council (a consortium of 231 federally recognized Alaska Tribes). Bristol Bay Tribes are pursuing litigation against the Pebble Project, and Alaska native leaders have met with Anglo American CEO, Cynthia Carroll, to communicate their opposition to the proposed mine, and to urge Anglo American to recognize the rights of indigenous peoples and the irreplaceable value of the fishery, and forego development of the project.

Over thirty prominent jewelry retailers have signed the Bristol Bay Protection Pledge, supporting permanent protection of the Bristol Bay watershed and committing not to source gold from the proposed Pebble Mine. These companies, which represent over $6 billion in sales and whose livelihood depends on gold mining, recognize that Alaska's Bristol Bay watershed is an ecosystem of national and international significance - supporting the world's largest remaining wild salmon fishery.  The jewelers include U.S. based companies Tiffany & Co., Zales, Helzberg Diamonds, Herff Jones, Ben Bridge, and U.K. based companies Goldsmiths, Mappin & Webb, and Beaverbrooks.

The Pebble Project is in advanced exploration, with permit applications expected in 2011. Opposition to the project by Indigenous People and other regional stakeholders has already triggered operational and legal challenges.

In May 2009, a number of Alaska Native Tribes filed a lawsuit challenging the Bristol Bay land use plan. Development of the Pebble mine relies on land uses authorized under the 2005 Bristol Bay area plan. If the legal challenge prevails, it is expected to trigger a new Bristol Bay Area land use plan, which could significantly extend the permitting process or preclude the project altogether.

In July 2009, Nunamta Aulukestai, an association of eight Native Village Corporations, filed a lawsuit challenging the exploration permits issued to the company.

Two regional corporations and five village corporations own a split estate of surface and subsurface lands along the mine's preferred road corridor. Approximately 50 miles of this route are within BBNC boundaries. In December 2009, the Bristol Bay Native Corporation (BBNC) passed a resolution opposing development of the project.

The company has already been found guilty of 45 water violations extending over a 3-year period of exploration activities.

In August 2010, he Bristol Bay Native Corporation, which represents 8500 shareholders, petitioned the U.S. Environmental Protection Agency to use its 404c veto power to proactively prohibit the Pebble Mine from disposing of dredge and fill material (mine waste) due to the risks to the salmon fishery.

Financial Times Advertisement about Pebble Mine.

Locals protesting against the Pebble mine

No dirty gold in the Bristol Bay

Earthworks is a non-profit organization dedicated to protecting communities and the environment from the destructive impacts of mineral development, in the U.S. and worldwide.
http://www.earthworksaction.org