This profile is no longer actively maintained, with the information now possibly out of date
Send feedback on this profile
Download as PDF By: BankTrack
Created before Nov 2016
Last update: 2015-11-01 14:53:10 Share this page: 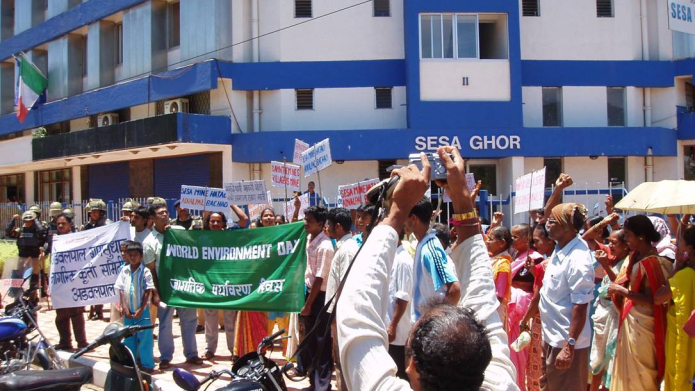 About Mining in Goa/ Sesa Goa

Sesa Goa is the largest iron ore producer and exporter of Goa. Since 2007 Vedanta Resources is the majority shareholder of Sesa Goa. Sesa Goa's main mining operations are at Codli and Sonshi. Sesa Goa also has other mining sites in villages such as Pissurlem in Sattari and Advalpal in Assonora.  Besides mining activities in Goa, Sesa Goa is also mining in Karnataka and Orissa.

Local communities and civil society groups have raised serious concerns about the impacts of mining in Goa. Read more.

Norway's pension fund, the world's second-largest sovereign wealth fund, sold its shares in Vedanta Resources due to the company's systematic environmental and human rights failures at four Indian subsidiaries. Banks should follow Norway's example.
Financial institutions that have a social ethic or a concept of responsible lending should sever ties with Vedanta Resources and its subsidiaries.

Sirigaon Litigation
In June 2008 Sirigaon village residents filed a petition to the Bombay High Court claiming dried up well and siltation as a result of the mining activities. The Bombay High Court ordered an independent government body to investigate the case (National Environmental Engineering Research Institute). In 2009 a report from this government body confirmed the depletion of water supplies and the land situation. It recommended that the companies (among others Sesa Goa) should “replenish the aquifier, restore the damaged rice fields and stabilise mine waste”. These actions are estimated to cost $1.4 million over 18 months. Read more.

Advalpal Litigation
In 2009 a public interest litigation was filed by a nine-year-old child of Advalpal village through his mother Sharmila Naik together with the Goa Foundation. The petitioners alleged that Sesa Goa was indulging in hazardous mining in violation of the approved mining plan. On September 17, 2009 the High Court of Bombay (interim order) restrained  Sesa Goa from undertaking Phase I and II mining in Advalpal. The Court ordered Sesa Goa to write a proposal for removing illegal mining dumps in Advalpal before the next hearing, likely in October 2009. Read more.

In April 2007, Vedanta Resources acquired a 51% controlling stake in the Indian iron ore mining company Sesa Goa and made a bid for another 20%. Total investment was US$ 1,370 million (€ 1,015 million). The acquisition was financed in July 2007 by a one-year bridge loan of US$ 1,100 million (€ 815 million) and existing cash resources. The bridge loan was arranged by ABN Amro Bank (now part of Royal Bank of Scotland), Barclays, Citigroup and ICICI Bank. Fifteen banks participated in the syndicate, which was signed in August 2007.

In August 2008, Vedanta Resources secured a US$ 1 billion (€ 642 million)five-year loan. The loan is used to refinance the US$ 1.1 billion acquisition loan that Vedanta took out in 2007 to help fund the purchase of a 51% stake in Sesa Goa, India’s biggest private sector iron ore producer. The total banking syndicate consisted of 24 banks.

Advalpal cries due to mining intrusion in the village

Sesa Goa's illegal dumps in Pissurlem: No Action from Government

Pictures of floods from mining sites in Goa