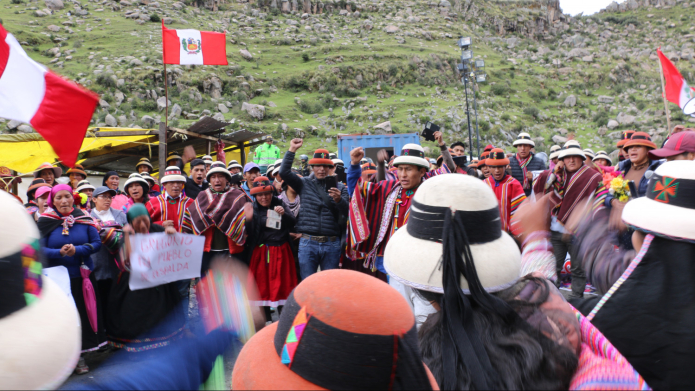 Since 2015 residents have been protesting against the Las Bambas mine. Photo: Courtesy of Derecho sin Fronteras

About Las Bambas copper mine

The Las Bambas copper mine is a large open-pit mine in Apurímac, Peru, at an altitude of about 4,000 meters above sea level. It is the ninth largest copper mine in the world. Las Bambas is owned by a consortium consisting of Australian mining company MMG (62.5% equity), and Hong Kong-based companies Guoxin International Investment (22.5%) and Citic Metal (15%).

From the beginning, the project was met with resistance from the local population. Since 2015, community protests have been severely suppressed by police forces, resulting in injuries and deaths, arbitrary arrests of protesters, as well as charges and trials in court cases.

Acquittal overturned in the process against 19 peasants

The operating consortium should organise the mine operation in a way that avoids negative impacts on the local population and environment.

The Industrial and Commercial Bank of China (ICBC) should examine the risk of possible negative impacts on human and environmental rights when financing projects and take action to prevent and mitigate any adverse impacts. If the bank’s activities contribute to human rights violations, it should provide remediation to the affected populations.

Luxembourg should establish legally binding legislation obliging banks and other businesses based in the country to prevent human rights violations and environmental damage and to provide remediation if their activities have caused or have contributed to adverse impacts.

The Las Bambas mine project has been accompanied by protests from the local population from the very beginning. The state forces have reacted to this resistance with repression, criminal law and the repeated declaration of a state of emergency. Five people have died in conflicts around Las Bambas.

On 18 March 2015, the mayor of Maras, who was opposed to the Las Bambas project, was shot and killed. In September 2015, protests against the project left four dead and 15 injured following police repression against community members. 30 protestors were arrested. On 29 September, the government decreed a state of emergency in four provinces of Apurímac and two of Cusco. On 2 October, the Preparatory Investigation Court of Cotabambas-Tambobamba ordered six months of preventive detention for two community members who had been arrested in the latest protests.

In February 2017, tension continued in the communities surrounding the Las Bambas mine. A strike in the district of Challhuahuacho (province of Cotabambas) that was to last 72 hours became indefinite.

In September 2018, in the criminal proceedings against 19 community members who participated in the 2015 protests (file no. 13-20015), the public prosecutor’s office demanded prison sentences of 11-17 years. The community members were charged with the offences of rioting, aggravated damages, and illegal possession of weapons, ammunition and explosives. Two of the accused had been in pre-trial detention for six months between September 2015 and March 2016.

On 24 December 2018, the state of emergency was extended and a massive police presence was noted in the area. January 2019 saw further police crackdowns on protestors in the Yavi Yavi area (Colquemarca, Chumbivilcas). A police tent went up in flames and a child was injured by the police.

On 22 March 2019, five leaders and legal representatives of the community of Fuerabamba were preliminarily detained for 15 days and accused of belonging to a criminal organisation when they arrived in Lima to attend a meeting to which they had been invited by the Presidency of the Council of Ministers of the Peruvian Government.

In June 2019, the Public Prosecutor’s Office charged 19 community members (who participated in the September 2015 protests) with the crimes of rioting, obstruction of communication routes and aggravated damages, requesting prison sentences of between 7-11 years (file no. 41-2016). On 8 October 2019, a woman lost an eye during police crackdowns on community members.

Key elements of the mine operations on which the initial environmental impact study was based were unilaterally modified by the operator at a later stage. Instead of a pipeline, the copper concentrate and the chemicals required for the mine operation are transported over local roads, which leads to environmental pollution (noise, dust, vibrations). Watercourses in the vicinity of the mine are polluted.

Acquittal overturned in the process against 19 peasants

On July 22, the Criminal Appeals Chamber of the Superior Court of Apurímac, in second instance, annulled the sentence that had acquitted 19 peasants affected by the Las Bambas mining project.

The facts of the proceedings date back to the September 2015 protests of the communities of the Grau and Cotabambas provinces against the Las Bambas mining project.

The Criminal Appeals Chamber declared the nullity of the acquittal sentence issued on 12 March 2021, in addition to annulling part of the criminal process up to the stage of control of the prosecutor’s accusation, with the argument that the sentence had not evaluated all the evidence against them and that the prosecutor had not complied with specifying the facts charged against each defender and the specific evidence to support his accusations.

As stated by the Peruvian CSO Fedepaz, to annul the process and return it to the hearing stage due to failures of the Public Prosecutor’s Office, means to transfer the damages of said failures to the defendants who see their right to obtain effective jurisdictional protection within a due judicial process violated.

On 9 December 2020, the Indictment Control Hearing against 19 accused leaders began (file no. 41-2016). On 17 February 2021, the Preparatory Investigation Court of Cotabambas-Tambobamba decided to close the investigation against 2 leaders for the crimes of illicit association to commit a crime, aggravated usurpation, disturbances, obstruction of communication routes and aggravated damages. It also decided to close the investigation into the remaining 17 for the crimes of aggravated usurpation and unlawful association to commit a crime, keeping pending its pronouncements regarding the crimes of rioting, obstruction of the means of communication and aggravated damages, with the Control Hearing continuing on 1 March 2020.

Investigation on the death of a peasant farmer

On 31 July 2020, the Preparatory Investigation Court in the investigation against a police officer for the death of a peasant farmer during the protests of September 2016 (file no. 179-2019), rejected the prosecutor’s request for an extension of the deadline for the preparatory investigation, which was appealed by the prosecution on 30 November 2020. The Appeal Hearing was held on 3 February 2021 and the Criminal Appeals Chamber of Apurímac confirmed the rejection of the extension of time requested by the prosecution.

On 20 January 2020, the trial began against 19 community members who participated in the protests of September 2015 (file no. 13-2015). On 2 March 2020, the 19 peasants on trial were acquitted (including the 2 peasants who were remanded in custody for 6 months). The sentence was appealed by the Prosecutor’s Office and the Prosecutor’s Office of the Ministry of the Interior, and the case is currently pending before the Appeals Chamber for a second instance decision.

In August 2019, the operator MMG took out two loans of USD 175 million each, exclusively to finance the operations of the Las Bambas mine. One loan was from the Bank of China in Sydney, the other from the Luxembourg branch of the Industrial and Commercial Bank of China (ICBC).

The Las Bambas copper mine is majority-owned by Australian mining company MMG.

Violence, power and mining in Peru: how has Las Bambas worsened repression?

Map of the Las Bambas project

In 2004, the Peruvian state granted a mining license for a site located in the Andean region of Apurímac to the Swiss company Xstrata (later acquired by Glencore). The first protests of the local population in Apurímac demanding that the project’s trust fund was properly distributed throughout the region started in 2005. Criticism related to the lack of transparency, slow decision-making and the lack of space for community representatives to participate. An environmental impact study was then conducted and, according to Glencore Xstrata, accepted by a part of the local residents in 2010.

In 2014, the project was taken over by a consortium of mining companies (MMG, Guoxin International Investment, and Citic Metal) for USD 5,850 million, making it the largest private investment ever made in Peru. The consortium asserted that they would adhere to existing agreements between the local community and Glencore Xstrata.

The first conflict occurred in 2015: around 400 local residents detained 100 workers from the mining company for hours, demanding the expansion of road infrastructure, the end of environmentally harmful activities, and the creation of local jobs. Further protests during 2015 resulted in deaths and numerous persons were injured. The government declared a state of emergency. Protesters were arrested and some of them spend months in pre-trial detention.

Despite all this, the mine started operating in 2016, with copper concentrate being transported away over local roads. From that moment, up to 300 heavy goods vehicles per day use the local roads, polluting the environment and affecting the 40,000 people living in the area with dust, noise and vibrations. After 400 kilometres on roads, the copper concentrate is transferred to freight trains and transported to the Pacific port of Matarani.

In the months following the start of the mining operations, the severe impacts on the local communities led to residents blocking access to the mine. During clashes with the police, people were injured and one local community member died. The protests continued in the following years, the government repeatedly declaring a state of emergency. In 2019, the mine had to be temporarily closed due to blockades.