This profile is no longer actively maintained, with the information now possibly out of date
Send feedback on this profile
Download as PDF By: BankTrack
Created before Nov 2016
Last update: 2016-10-12 23:18:41


Katharine Lu, Friends of the Earth US 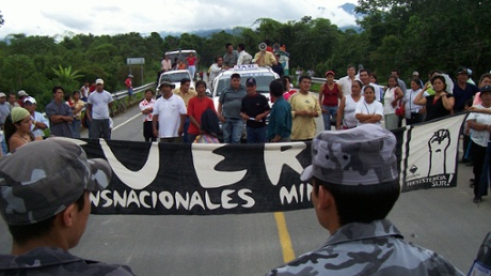 About El Mirador Copper Mine

El Mirador is a copper mine project located in outheast Ecuador, widely considered one of the most biodiverse regions in the world. In 2010, two Chinese state owned enterprises, China Railway Construction Company (CRCC) and Tongling Nonferrous, bought Corriente Resources, which owns subsidiary Ecuacorriente Resources. Later in 2012, the Ecuadorean government awarded Ecuacorriente mining rights to El Mirador. The Mirador copper mine would consist of six copper sites which are expected to be operated as open pit mines.

The concession spans across 10,000 hectares and would remove all vegetation and superficial soil layer in the mined area. Within the concession, over 6,000 hectares of the Protected Forest of the Condor Highland will be affected.

The copper deposit contains a proven reserve of 660 million tons of copper ore, (the copper content in this ore has an average of around 0,6%) in addition to some gold and silver ores. It is expected to produce about 30,000 tons per day over a period of more than 19 years. The mining concession also allows Ecuacorriente the rights to other minerals that may be found in the waste rock, such as uranium or molybdenum.

The project will create a series of environmental and social problems for indigenous communities. Local communities have already reported that Ecuacorriente did not obtain consent from residents on the project. Indigenous peoples have maintained that any mining in the area would irrevocably displace communities and impact their ability to sustain their livelihood, as mining activity would cause and spread heavy metal pollution, destroy sources of potable water, render at least three amphibian species to become extinct, and potentially contaminate the broader Amazon river system with waste generated by the copper mine.

Local Ecuadorean NGOs have raised concern on the lack of a complete environmental and social risk assessment for the project, violations of Ecuadorean laws, violations of international norms, and of a Chinese finance policy. The project is slated to begin construction at the end of 2015, and would become the first large scale mining activity in the country.

Ecuadorean and indigenous communities have called for a permanent end to all Mirador mining operations.

Given the location of Mirador in La Cordillera del Condor, the copper mining project will have severe impacts on local communities. According to reports from local residents, Ecuacorriente did not seek their consent for the project. Although company representatives contacted residents and met with them, indigenous peoples have stated that conversations with the company aimed to gather information from residents about the local region, rather than obtaining community consent to develop the copper project.

In addition to the lack of free, prior, informed consent, the mining development will create a host of environmental problems with negative social impacts. For instance, acid mine drainage, which involves chemicals leaching into the water system from the mining process, in addition to the widespread destruction of protected forest and pollution of local water sources, will dispossess indigenous peoples of their livelihood by rendering their communities extremely toxic or uninhabitable. The environmental audit report of the Comptroller General identified 641 water sources that would be affected by the project.

The Mirador Copper Mine will violate the rights of indigenous peoples. These rights are articulated in the UN Declaration on the Rights of Indigenous Peoples. Article 7, which guarantees the rights to live in peace, freedom, and security, and Article 10, which maintains the right of free, prior, and informed consent and fair and just compensation, would be violated as the project would dispossess local residents' ability to live freely and deny their collective rejection of the mining. Articles 18, 23, 26, 28, 29,and 32 would be violated as well.

Due to its location in the Upper Amazon Basin, mine development in El Mirador would likely contaminate downstream waterways of the Cordillera del Condor, thus potentially polluting the entire Amazon River system. According to the Environmental Impact Assessment conducted by Walsh Consultant, three species of amphibians will become extinct: allobates kingsburyi, pristimantis prhodostichus and pristimantis incomptus. One reptile species, enyalioides rubrigularis, will go extinct as well. Developing the mine would jeopardize other, already endangered species.

The mining activity would eliminate all vegetation in the mined area, essentially annihilating the entire local ecosystem. It will require the stripping of about 450,000 acres of Southern Amazon cloud forest, home to the Shuar indigenous people.

As mentioned, consultation processes with indigenous communities have not occurred. The few interactions that have taken place generally involve the company and male leaders. There are no opportunities for indigenous and peasant women to participate. In addition, many indigenous women, especially elderly women, do not read, write, nor speak Spanish, thus preventing them from voicing their concerns.

Labor Issues
In May 2012, the President of Certero, a Shuar community, denounced the President of the Republic and the Minister for Industrial Relations for the unfair labour practices committed by an official of the mining company Ecuacorriente. On the morning of May 24, 2012, company officials assaulted local residents (source communication May 25, 2012, signed by the President of the Shuar Community of Certero).

The existence of these abusive practices has been known since October 2012, with the cessation of 200 workers at ECSA. These workers were a part of the union, "Takamamu" Mirador. The workers hoped to use the strike as a way to leverage the firm into reaching a collective agreement. On May 17, 2014, there was another work stoppage, which ended with the dismissal of eleven workers who belonged to the union.

Production planned to start in 2018

Chinese firm Ecuacorriente plans to start production at Mirador, Ecuador's second largest known copper deposit, by 2018. The mine will reach its full potential by 2020 with a projected output of some 30,000 t/d of copper concentrate, mining minister Javier Cordova told Argus.

A group of workers in the mining Ecuacorriente met yesterday for about five hours with representatives of the Chinese company and the Minister for Employment Relations, Carlos Marx Carrasco, who was accompanied by advisers.

The purpose of the meeting was to reach an agreement on making the camp by 120 workers Mirador mining project in the area of ​​San Carlos , Tundayme parish in Zamora. The company workers occupied the premises on Saturday for alleged labor violations.

El Mirador project has 2.9 million tons of copper reserves, valued at about USD19 billion. It is the only project of large-scale mining taking place in the country , by the Chinese company Ecuacorriente, who signed a contract with the Ecuadorian government in March 2012 for the exploitation of the copper deposit. It plans to put produce from next year.

However, the 120 workers took the camp and halted work on the weekends because they believe that there are abuses by the Chinese firm. According to the secretary of the company Ecuacorriente, Carlos Neichal , the company fired the eight leaders of the workers who took possession of the new policy committee last April .

In 2014, Accion Ecologica repeatedly requested information from the Chinese Embassy regarding Chinese lending to El Mirador. The Embassy in Quito provided a phone number for Accion Ecologica to call. Numerous attempts to call over one and a half months were made. However, as of May 2014, nobody has ever answered the phone. On May 12, the community of San Marcos in La Cordillera del Condor reported the presence of police and security guards. Residents reported that workers brought in machinery and equipment for the mine and in the process destroyed community property, such as the playground.

No replies from Chinese banks

In February 2014, Chinese banks financing El Mirador, were notified of the environmental and social problems of the project. Accion Ecologica, indigenous peoples, and other Ecuadorean NGOs collectively voiced concern in their request to know how Chinese banks were implementing the Green Credit Directive, and how lenders were evaluating Tongling Nonferrous in light of Ecuacorriente's illegal behaviour.

In March 2012, local activists embarked on a two week march to protest Chinese investment in El Mirador. While delivering a letter to the Chinese Ambassador, female activists waited hours to see the ambassador, only to be evicted by police.

Lawsuit on violation of Rights of Nature

In February 2013, Ecuadorean NGOs filed a lawsuit against Ecuacorriente on the basis the Mirador copper development would violate the Rights of Nature, which is enshrined in the Ecuadorean Constitution.

In March 2012, local activists embarked on a two week march to protest Chinese investment in El Mirador. While delivering a letter to the Chinese Ambassador, female activists waited hours to see the ambassador, only to be evicted by police.

Was this indigenous leader killed because he fought to save Ecuador's land?

What good are China's green policies if its banks don't listen?

China's 'going out' companies must tread the earth more lightly

China's 'going out' companies must tread the earth more lightly

“To get the gold, they will have to kill every one of us”

The Mirador copper mine is located in La Cordillera del Condor, a mountain range in the Eastern Andes, and is regarded to be one of the most biodiverse regions of South America. The mine sits on a copper belt which spans across an area of 1,600 km on the border between Peru and Ecuador. The mining industry considers the mine to be one of the last undeveloped copper mines in the world. According to Corriente Resources, the copper belt "currently contains four copper and copper-gold porphyry deposits: Mirador, Mirador Norte, Panantza and San Carlos. Six additional copper exploration targets: La Florida, San Luis, San Marcos, San Miguel, Sutzu and Dolorosa have been identified in the Corriente Copper Belt to date."

In 2012, the Ecuadorean government awarded Ecuacorriente an environmental license to begin open pit exploration and exploitation of copper and any minerals found by the company. The controversial  project has caused an ongoing series of public protests against mining in the country. In March 2012, a group of women entered the building and waited to deliver a letter to the Chinese Ambassador that urged the embassy to reject Ecuacorriente's Mirador project. After waiting inside to see the ambassador, local police forcibly removed the women from the building. Outside the embassy building, approximately fifty other activists also stood in protest of the mining project.

In 2013, human rights groups and Ecuadorean NGOs filed a lawsuit against the government of Ecuador for violating Articles 71-73 of the Ecuadorean Constitution. The lawsuit argued that the Mirador project could not go forward due to violating the Rights of Nature, as codified in the country's Constitution. The court ruled in favour of the project.

According to Ecuadorian NGO Accion Ecologica: "Repression has been used against those who oppose open-pit mining but local resistance to mining has the support of Ecuadorian and international environmental organizations." In 2013, Pachamama Fundacion, one of the Ecuadorean NGOs who submitted the lawsuit, was shut down by the government on the grounds of "fomenting dissent and violence".

An Accion Ecologica report stated that the Mirador project will set a precedent in how the country manages its natural resources and exctractive industries. For local and indigenous communities, the stakes are high. According to the report: "The Cordillera del Cóndor project is paradigmatic for understanding the scope of the potential impacts of open-pit mining, because this is an area of high biodiversity and part of the ancestral territory of the Shuar people; it is also an area of great importance for the regulation of water for the whole region."