This profile is no longer actively maintained, with the information now possibly out of date
Send feedback on this profile
Download as PDF By: BankTrack & Inclusive Development International
Created on: 2019-03-11 12:31:38
Last update: 2021-06-01 00:00:00 Contact: 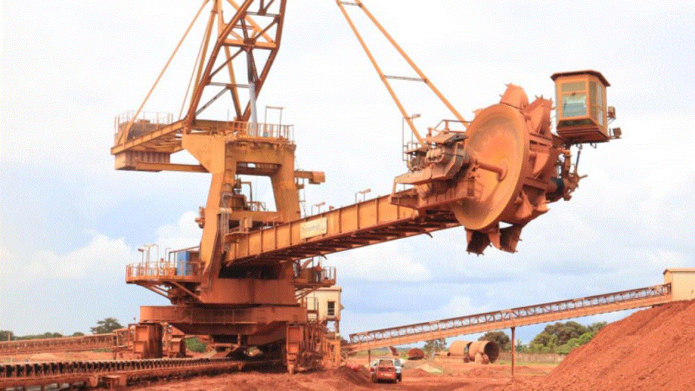 Compagnie des Bauxites de Guinée SA (CBG) is a bauxite mining company created in 1963 to mine around the town of Sangaredi in the Boké region of western Guinea.

Since the company began operations, it has progressively mined a growing area of land at the expense of the rights and welfare of local communities. Failure to address deep seated grievances of the local population and the expansion of its operations to encompass an even larger area have brought frustrations of affected communities to a boiling point.

The Bauxite mining project CBG has taken and continues to take land without the consent of communities, including ancestral land, agricultural land and residential areas. Thirteen villages, whose livelihoods and water sources have been severely affected,  filed a complaint to the IFC’s Compliance Advisor Ombudsman in February 2019. Mediation began in January 2021.

Banks should avoid providing finance to CBG until it has provided full and fair redress to the communities whose land it has taken and set in place procedures in line with Guinean law and international human rights standards to prevent these harms continuing and recurring.

Land expropriation without adequate compensation
For years, Compagnie des Bauxites de Guinée (CBG) has denied land rights of local communities, creating immense frustration amongst the population after decades of land grabbing and natural resource destruction. CBG’s current expansion project means it is now acquiring more land for new infrastructure and additional sites of exploitation without addressing the continuing impacts from its past operations, nor significantly changing its practices on the ground vis-à-vis communities’ land rights.

It has been estimated that CBG’s expansion activities will physically or economically displace 3,200 people between 2016 and 2022. In March 2019, 540 affected people from 13 communities within the area of CBG’s concession filed a complaint  to the IFC's Compliance Advisor Ombudsman arguing that they not been accorded their entitlements and protections under Guinean law and the IFC Performance Standards (PS).

At least seven communities (Hamdallaye, Parawol, Kongon Lengué, Lafou M’baïla, N’danta Fognè Samayabhè and Bourorè) claim that land has been taken from them without compensation, for the land or for their destroyed crops. For example, the village of Hamdallaye has lost 40% of its ancestral land to CBG’s activities between 2005 and 2018 without any compensation. One of the villagers of Hamdallaye told Human Rights Watch, “there’s nobody in this community who hasn’t lost land to CBG”.

The other communities involved in filing the IFC complaint (Boundou Wandè, Paragögö, Parawi, Fassaly Foutabhè, Sinthiourou Lafou and Horè Lafou) only received compensation for the loss of crops and trees. An environmental and social audit found in 2018 that CBG ‘never directly compensated land users and occupiers for land on the basis that all land belongs to the state’. The practice of compensating only for plants and crops means, for example, that communities do not receive any compensation at all for land that is lying fallow as part of their crop rotation system.

In 2018, CBG told Human Rights Watch that it will compensate families with customary land tenure rights with replacement land when possible and will otherwise provide financial compensation, but affected communities told HRW that CBG has not done this. In the same year, CBG told the community of Bourorè that they will only receive compensation for crops and trees. Crops have also been destroyed by CBG without prior notice in the communities of Fassaly Foutabhè and N’danta Fognè.

In June 2020 a report from Inclusive Development International and partners found that CBG had relocated hundreds of families from Hamdallaye villagein "to an unfinished resettlement site without adequate housing, water and sanitation, or sufficient arable land and sustainable livelihood opportunities", under cover of the COVID-19 lockdown, prior to the commencement of a World Bank backed mediation procedure.

Safety and security issues
The construction of infrastructure, the layout of the mining roads and the installation of the storage and blasting zones by CBG clearly did not take into consideration the impact on the quality of life of the communities, nor the risks to their safety.

Residents of the village of Fassaly Foutabhè are forced to cross the CBG stockpiling area, where no appropriate security measures have yet been implemented, in order to go to Hamdallaye for Friday prayers. Similarly, the villagers from Kogon Lengué have to cut across CBG’s zone of operations to access the village of N’danta Fogné’. Residents state that in 2017, two young men from Kogon Lengué were arrested and imprisoned simply for using this road.

In Parawi, a young man was killed in 2017. Residents  state that the day before his death he had an argument with a CBG worker who did not let him access his land because CBG had to conduct activities there. The residents state that the young man returned the next day to farm and was crushed by a bulldozer as he was sleeping nearby his plantation. The complainants are not aware of any criminal investigation into this accident.

All the communities also suffer enormously from the blasting activities that are carried out close to the villages: the dust invades the houses, which are now are cracked, and objects fall from the blast. In some villages, stones are thrown by CBG workers into neighboring fields, without any effective safety measures being taken to avoid accidents. In Bourorè, residents found stones that had been projected all the way into their village. Some communities state that CBG activated sirens a few minutes before blasting, but that was usually not enough time to get away or make sure that children were safe.

Health issues
Villagers around CBG’s mines have reported health problems, in particular, stomach aches and diarrhea in children, that they believe are the result of water pollution due to mining activities and the lack of alternative water sources.

The precise impact of the mining activities on the quality of the air and attendent health risks are not clear due to limited monitoring and measuring of air quality by mining companies and unavailable health statistics. CBG has only started to adequately monitor air and water quality around its operation since 2017.

Due to water scarcity of mining activities, women, who are often responsible for fetching water, are forced to walk longer distances to reach water sources and face long lines and high tensions at the remaining water sources. The reduction of water sources also threathens womens main economic activities, gardening, vegetable production and palm oil extraction, which occurs close to streams.

While it is already hard to obtain a job in the mining sector for inhabitants of local villages, it is even harder for women. In May 2018, only 10 percent of the people employed directly by CBG were women.

Although women participate in farming, when compensation is paid, it is often only paid to male heads of households. Women therefore not only loose their access to land but also become wholly dependent on their husband or extended family.

Water scarcity and contamination
Water sources like natural springs, local streams and rivers surrounding CBG’s operations have been reduced in their flow and are polluted with red mud from the mine. In the N’danta Fogné for example at least nine water sources have been destroyed by CBG’s activities, including the stream of Badon, which was previously a reliable source that supplied the whole village. CBG has provided some villages with boreholes but the community of Fassaly Foutabhè doubts the water is suitable for consumption and in Hamdallaye only one out of three boreholes is operational. In other communities like Paragögö and Sinthiourou Lafou people continue drinking the polluted water against the recommendations of their doctors since they have no alternative.

Bauxite mining does not require toxic chemicals, but the rocks of the mining waste contain heavy metals that can be dangerous at high concentrations. Since this waste has been observed in streams and rivers it is likely that these water sources are contaminated with these heavy metals. Unfortunately, CBG’s testing results are never made public and historic data is absent. Communities therefore don’t know whether the water they consume for drinking, cooking, washing and farming is safe and what effect mining has had on these water sources. CBG did not start monitoring the quality of and impact of mining on rivers, streams and groundwater until 2017. Water testing results are not made public nor shared with local officials.

Villagers state they have witnessed an unprecedented decline of wildlife and even the total extinction of some species in the region. They believe that water pollution as well as the impacts of mining infrastructure, notably mining roads and the railway lines crossing fields and forests, are probably the main causes. The decline of animals and fish has also significantly contributed to the degradation of livelihoods since communities largely depended on fishing and hunting, in addition to agriculture.

Communities believe that air pollution and dust generated by mining activities have also resulted in the decline, and in some instances the total extinction, of many species of wild fruits and plants that were used by the communities for medicinal purposes. Communities believe that the disappearance of these plants is threatening traditional pharmacopoeia and endangers their health as well as to their way of life and cultural identity.

Civil unrest has been sparked as a result of CBG's activities several times in recent years as communities have protested against power outages and pollution levels as well as the continued high levels of poverty and unemployment in the mining town of Boké where CBG is based. At least two people have been killed by Guinean security forces according to media reports of unrest (See Reuters, April 2017; Reuters, Sept 2017; Aluminium Insider, March 2018).

In January 2021, mediation began on the complaint brought to the IFC’s Compliance Advisor Ombudsman in February 2019 by thirteen villages whose livelihoods and water sources have been severely affected by Compagnie des Bauxites de Guinée SA. The CAO "approved a document that will enable talks to begin on the dispute over compensation paid by Compagnie des Bauxites de Guinée to people living near its huge Sangaredi mine", reports Africa Intelligence.

While communities across Guinea were under Covid-19 shelter-in-place orders, a joint venture owned by mining giants Alcoa and Rio Tinto relocated more than a hundred families to expand its sprawling bauxite mine, states a report from Inclusive Development International. Residents of Hamdallaye village in the Boké region of Guinea, who have been seeking redress for the loss of their ancestral farmlands and livelihoods to the mine, say that Compagnie des Bauxites de Guinée (CBG) moved them to an unfinished resettlement site without adequate housing, water and sanitation, or sufficient arable land and sustainable livelihood opportunities. The surprise move took place prior to the commencement of a long-awaited World Bank-backed mediation between the community and CBG, which had been scheduled for March 2020 but was delayed due to the COVID-19 pandemic, among other issues. Read more.

Opinion: Why is IFC contributing to poverty in Guinea?

New Round of Riots in Guinea Impede Bauxite Shipments

What Do We Get Out of It?