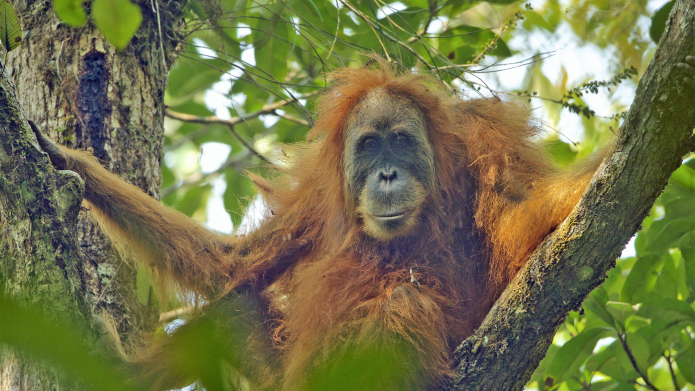 Endangered by the Bantang Toru Dam: the rarest species of great ape in the world, the Tapanuli orangutan. Photo: Tim Laman via Wikimedia Commons (CC BY 4.0)

The Batang Toru Dam is a proposed hydroelectric dam project in the fragile Batang Toru ecosystem, North Sumatra. The project is expected to generate 510 MW electricity for six hours a day and will occupy several hundred hectares of prime habitat along the Batang Toru River in the South Tapanuli district, but would impact a much larger area. Currently, land is being developed and cleared for the project. PT North Sumatra Hydro Energy (PT NSHE) is developing the project, originally announcing plans for the hydropower plant in 2012. The dam is slated to become operational by 2022 and is expected to cost USD 1.6 billion.

The Batang Toru Dam will have potentially irreversible environmental, social, and biodiversity impacts on the North Sumatra region in Indonesia. The Batang Toru ecosystem is a critical habitat for many endangered species including Sumatran tigers, sun bears, agile gibbons, and pangolins. This ecosystem is the only known habitat of the newly discovered Tapanuli orangutan, of which less than 800 currently remain – making it the most endangered Great Ape species in the world. If built, the Batang Toru Dam project will likely doom the Tapanuli orangutan to extinction.

PT NSHE and Sinohydro should immediately halt all operations, and remove already built infrastructure, including roads and bridges, which is currently giving access to poaching, illegal logging and land speculation. Given the high densities of orangutans at the project site, any further disturbance will have severe consequences for the Tapanuli orangutan.

Reputable independent consultants should immediately conduct a new environmental impact assessment. Given the presence of critically endangered species and the impacts on downstream communities, this will undoubtedly show that Batang Toru is not a suitable location for a hydroelectric dam.

To ensure the long-term survival of the Tapanuli orangutan, the Indonesian government must give legal protection to the whole Batang Toru forest. This will prevent similar threats emerging in future.

The dam will radically alter the nature of downstream water courses, significantly impacting the local people. It will produce electricity during periods of peak demand, typically between 6pm and midnight. During the day, the river will be blocked and the reservoir above the dam will gradually fill up, to be released later through the tunnel and turbines to generate electricity. Downstream communities, which normally experience drought and flood cycles a few times a year, will now have to learn to cope with them on a daily basis.

Flawed impact assessment The environmental impact assessment (EIA) is deeply problematic. While it recognizes the existence of the many of the problems listed below, including the presence of orangutans and other endangered species, it fails to address the full impacts the dam will have on wildlife, or other problems such as mitigation measures for the impacts on downstream communities.

Risk of extinction The Batang Toru forest is home to the entire remaining population of Tapanuli orangutans, the most endangered great ape species in the world. The new project poses a very real threat of extinction for this entire species. Many more endangered species will be severely impacted, such as Sumatran tigers, sun bears, agile gibbons and pangolins.

Threats to fisheries and river ecology The dam will split the river in two, preventing fish and other species from migrating along the river. This will have serious impacts on fish like jurung, an extremely important and highly valued source of food and income for local communities.

Threats from pollution Despite being billed as a ‘green’ project, like all large hydroelectric projects the Batang Toru dam will emit significant quantities of greenhouse gases, contributing to climate change. These emissions originate from the manufacture of the massive amounts of concrete and other materials needed for construction. They are also emitted by decomposing vegetation in the flooded reservoir above the dam, especially methane, which as a greenhouse gas is 30 times more potent than carbon dioxide. Other dam reservoirs have also led to increased concentration of methylmercury in the aquatic food chain, which is known to cause brain and nervous system damage.

Risk of earthquakes Batang Toru lies in the middle of an earthquake hotspot: the region has the highest density of earthquakes in mainland Sumatra. There is also mounting evidence that reservoirs can themselves trigger earthquakes, due to the increased pressure created by large bodies of water. If an earthquake were to strike and rupture the dam when the reservoir was full the consequences for those living downstream would be catastrophic (Damming Evidence report 2018).

IFC Performance Standard 1: Assessment and Management of Environmental and Social Risks and Impacts

Bank of China has said it will evaluate its funding commitment to the Batang Toru hydropower plant project in North Sumatra amid environmental concerns. “Bank of China will evaluate the project very carefully and make prudent decisions by duly considering the promotion of green finance, fulfilment of social responsibility as well as the adherence to commercial principles,” the bank said in a statement posted on its website (The Jakarta Post).

On March 1st, 2019, activists in cities around the world staged protests outside Bank of China branches and Chinese diplomatic missions to protest the bank's links to the Batang Toru dam. Wahli (Friends of the Earth Indonesia) and Friends of the Earth US helped to coordinate the actions. On March 4th, Bank of China responded, in a rare engagement from a Chinese bank, saying it "will evaluate the project very carefully and make prudent decisions by duly considering the promotion of green finance, the fulfilment of social responsibility as well as the adherence to commercial principles."

The Batang Toru Dam is expected to cost USD 1.6 billion and is largely funded by the Bank of China, as part of China's Belt and Road Initiative. The project's joint venture partners (PT DHN, Fareast Green Energy, and PT PJB Investasi) are expected to provide equity finance.

The World Bank and the Asian Development Bank have shied away from supporting the Batang Toru Dam project in Indonesia over environmental concerns.

Dirty tricks behind conservation u turn for worlds rarest ape

Unlike its peers, Bank of China shows some interest in working with civil society on controversial Indonesian dam

As Beijing Looks to Lead on Biodiversity, China-backed Hydropower Threatens to Wipe Out the Rarest Great Ape on Earth

Environmentalists from the Indonesian Forum for the Environment (Walhi) staged a rally in front of the Bank of China office in Jakarta on Friday in protest against a dam construction project in Batang Toru district, South Tapanuli, North Sumatra.
2019-03-02 | Jakarta Post
blog
external news
our news

Activists in Jakarta and cities around the world staged protests outside Bank of China branches and Chinese diplomatic missions on March 1.
2019-03-01 | Mongabay
blog
external news
our news

China-backed Sumatran dam threatens the rarest ape in the world

Protest against hydropower plant in Sumatra ends with injuries

Letter from WALHI to Bank of China on Batang Toru Dam

Location of the Batang Toru ecosystem

Guidelines for Environmental Protection in Foreign Investment and Cooperation

As issued by the Chinese Ministry of Commerce March 1 2013

Friends of the Earth Indonesia (WAHLI)

PT North Sumatra Hydro Energy (PT NSHE) originally proposed the Batang Toru Dam in 2012, and as of 2018, land is currently being cleared for access roads and dam construction. The project is intended to begin operations by 2022. PT NSHE is a joint venture owned by the parent companies: PT DHN (52.8%), Fareast Green Energy (22.2%), and PT PJB Investasi (25%), respectively. According to PT PJB Investasi, this project will only operate during peak electricity demand.

Chinese state-owned Sinohydro has been awarded the engineering, procurement, and construction contract for the project. According to publicly available information, financing for the project seems to be provided through a combination of equity investment from various parent companies and a loan from Bank of China. A power purchase agreement has been signed with Indonesian state owned enterprise PT PLN.

According to Indonesian media, PT NSHE has already prepared a project level grievance mechanism. However, there have already been earlier reports of injuries and conflict between local communities and PT NSHE staff. For instance, in August 2017, a group of local residents protested against the field surveyors of PT NSHE in Luat Lombang village of North Sumatra’s Sipirok subdistrict, which left some residents injured. Furthermore, in May 2018, Indonesia’s largest environmental group, WALHI, delivered a letter to the Chinese Embassy in Jakarta, Indonesia, condemning the dam project and its serious environmental, social, and biodiversity impacts. WALHI has also documented that the dam developers failed to conduct local consultations according to Indonesian laws and regulations.