This profile is no longer actively maintained, with the information now possibly out of date
Send feedback on this profile
Download as PDF By: BankTrack
Created before Nov 2016
Last update: 2016-10-18 13:17:19 Contact: 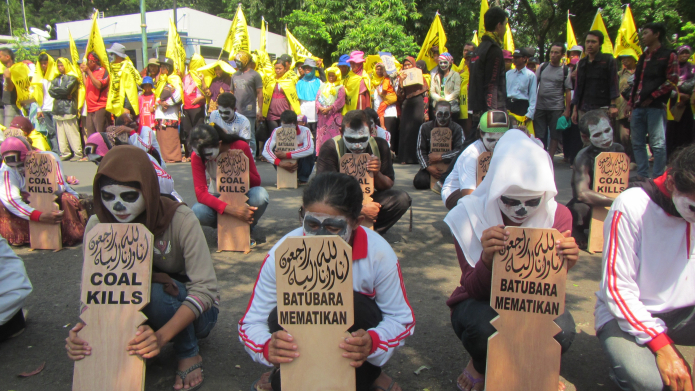 Batang coal-fired power plant (2,000 megawatt) will be one of the biggest coal-fired power plants in Asia. It will cost approximately JPY400 billion (USD four billion). Japanese companies J-POWER and Itochu are major players in the project. The Japanese Bank for International Cooperation (JBIC) and private banks are under consideration for the financing. The Japanese government is likely to promote the project under the public-private partnerships (PPP) scheme.

The Batang power plant will be built by PT Bhimasena Power Indonesia (BPI), a local company which is a joint venture of J-Power, Adaro and Itochu. It was established in a build-operate-transfer (BOT) scheme and will operate as an independent power producer. It signed a 25-year power purchase agreement (hereafter referred to as PPA), with the Indonesian State Electricity Company (PLN) using the BOT scheme. This will be the first PPP project based on an Indonesian Presidential Decree.

The power plant will be fuelled by Indonesian sub-bituminous coal and will use Ultra Super Critical (USC) technology. This is why Japan is such a big sponsor of the project, as it will be exporting this technology to Indonesia.

Case filed against J-Power and ITOCHU

The World Bank should immediately cease financing Batang as it goes against its new policy to quit supporting coal projects worldwide. It should also ensure its existing projects conform to its new standards and embrace more geothermal and other renewable energy projects in Indonesia. JBIC should immediately pull out of the project as it does not comply with its own standards. It lacks social acceptability and the project is not lawful, as is required by JBIC Guidelines.

Japan, which has also played a major role in pushing the dirty Batang plant, must cease peddling its coal projects in Asia, and embrace clean energy as it promised to, after the Fukushima disaster. The Indonesian government should spent the requisite USD four billion on cleaner, more sustainable, renewable energy solutions.

Commercial banks must not participate in the financing of this project in any way.

The Batang locals have voiced their concerns about the negative health effects the project will bring as well as the impact it will have on their livelihood which is so heavily dependent on the fertile agricultural land and fishing area. These concerns are not only isolated to the local area, but have also reached the capital of Jakarta where a protest was held in front of the Japanese embassy. However, in an attempt to repress the locals' protests, the military and police took violent action which resulted in several injuries.

More than 7,000 villagers have expressed concern over the proposed power plant. Fifty local landowners have refused to sell 55 hectare of land that is needed for the proposed 226 hectare power plant. The local community has protested on 22 occasions, both locally as well as in Jakarta. On July 22, 2013, about 180 Batang locals protested at the Japanese embassy in Jakarta. The following week, on July 30, local authorities and the military resorted to taking violent action against protestors, which resulted in 17 injuries, according to local news reports.

Local people are concerned about the plant's impact on their livelihood and health. Construction will destroy fertile agricultural land. Emissions from the plant will pollute local coastal areas where more than 10,000 fishers earn their living. It is estimated that the facility can emit some 226 kg of mercury per year. Just 0.907 grams of mercury in a lake has the potential to make fish in a one hectare area unfit to eat.

The proposed power plant infringes upon the Ujungnegoro-Roban coastal area, which is protected as a Marine Protected Area and Local Sea Tourism Object under Government Regulation No. 26/2008. Part of the power plant will be built at sea and infringes upon a protected area, in direct violation of Central Java provincial bylaw No 6/2010 on spatial planning.

There have been major initiatives by the Indonesian government to combat climate change. In 2009, the government pledged to reduce its greenhouse gas emissions by 26% by 2020. However, the Batang power plant alone is likely to emit 10.8 million tonnes of CO2 per year. If coal fired power plants continue to be built, Indonesia's energy sector emissions could double by 2020. If we are to have any chance of avoiding catastrophic climate change, according to scientists, we must limit global temperature rises to two degrees Celcius from pre-industrial level.

Strong-arm tactics employed against farmers opposing this coal project In Batang Regency, on the north coast of Central Java, Bhimasena Power Indonesia (BPI) has made way for a massive coal power plant project in part through strong-arm tactics against local farmers opposed to the project. In this report, farmers talk about the anger and frustration they feel about being fenced off from their land and livelihoods, harassed by security guards. “Farmers, landowners and others who reject the coal power plant often receive threatening text messages. In other cases, paid thugs have visited residents’ houses, intimidating them to sell their land.” Lembaga Bantuan Hukum (LBH) Semarang, a legal aid organization that has been working with the community, also says a deception tactic is being used in which the company makes it seem as if they’ve already acquired large amounts of land as a way to pressure residents who have not yet sold (source www.corruptionincoal.org).

JAKARTA – Dozens of Indonesian farmers and environmental activists gathered on Monday 6th of December outside the Japanese embassy in Jakarta to demonstrate against the expansion of coal power plants, with which the Indonesian government hopes to drive the electrification of the archipelago. The farmers, hailing from Batang district in Central Java province of Indonesia, threw dirt and paddy rice on a tarp in front of the embassy in a symbolic display of their livelihoods, which will be in jeopardy if the $4-billion coal-fired plant partially financed by the Japanese government goes ahead. Greenpeace joined the rally to raise the issue of greenhouse gas emissions as well as health risks caused by toxic mercury pollution to the 15,000-person strong communities in the vicinity of the plant. “Every new coal-fired power plant means elevated health risks for Indonesians. Lives, including those of children, are cut short due to strokes, heart attacks, lung cancer and other cardiovascular and respiratory diseases,” said Greenpeace’s climate and energy campaigner Arif Fiyanto, who urged the Indonesia government to source more sustainable sources of energy. Read more here.

Case filed against J-Power and ITOCHU

Jakarta. Residents of Central Java's Batang district, alongside environmental activists,  rallied at the State Palace calling on President Joko Widodo to halt construction of a 2,000 megawatt coal-fired power plant, arguing that land procurement for the plant is still not finalized ten years after the project was launched. "Time is up for the Batang coal-fired power plant," Arif Fiyanto, head of climate and energy campaigning at Greenpeace Southeast Asia, said.

According to the Jakarta Post:  President Joko "Jokowi" Widodo attended the ground-breaking ceremony that marked the start of construction of the Batang coal-fired power plant in Central Java, although no ground was broken that day. With his speech he hoped to instill optimism and confidence that construction of the massive coal plant will begin imminently, as though all of the project's problematic financial issues had been resolved.

However, the reality is that the power plant has been delayed for nearly four years now due to persistent opposition from the local villagers living near the project site. Today, dozens of landowners are still refusing to sell their land. They own around 10 percent of the 226 hectares needed for this mega-project.

It owns 32% of the joint venture PT Bhimasena Power Indonesia.

It owns 34% of the joint venture PT Bhimasena Power Indonesia

Why coal is a bad bet for Indonesia’s future

Statement on JBIC by Friends of the Earth Japan.

Japanese Banks' Involvements in Human Rights Violations based on 4 Cases

The True Cost of Coal

Protest at Japanese embassy in Jakarta by Indonesian farmers and activists, 6 December 2016

No Coal! Go Green! – No to JBIC's coal financing! project