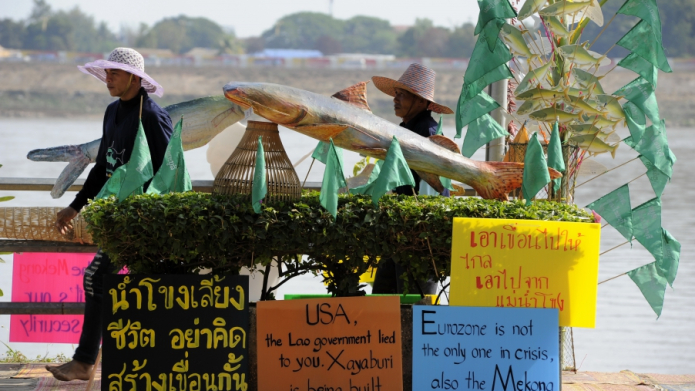 As world leaders gathered in Vientiane, Lao PDR for the 9th Asia-Europe Summit, 250 Thai villagers gathered in boats on the Mekong River outside the city to protest the Xayaburi Dam. The villagers represented the 24,000 people in Thailand who will be affected by the proposed Xayaburi Hydropower Project in Laos.

The Xayaburi Dam in Lao PDR—the first planned hydropower dam on the Lower Mekong Mainstream – provides warning to the Heads of State from Asia and Europe that tensions are brewing over the region’s most important shared resource. The Mekong River has reached a crisis point with plans to construct the Xayaburi Dam and a cascade of eleven dams rapidly moving forward.The protest was organized by the Network of Thai People in Eight Mekong Provinces and the Network of Community Organization Council in Seven Northeastern Provinces.

Construction on the Xayaburi Dam is currently underway, despite significant concerns raised by the Cambodian and Vietnamese governments and the people of the Mekong River Basin regarding the project’s transboundary impacts and the need for further study.

In their petition to the governments, the communities stated, "Since energy is part of the agenda during this important meeting, we would like to inform you that the Mekong is the bloodline, the life, the spirit and the culture of at least over sixty million people."

Scientists have concluded that, if built, the dams will impact the food security and livelihoods of 60 million people living near the Lower Mekong River.

To see photos from the protest, please click here