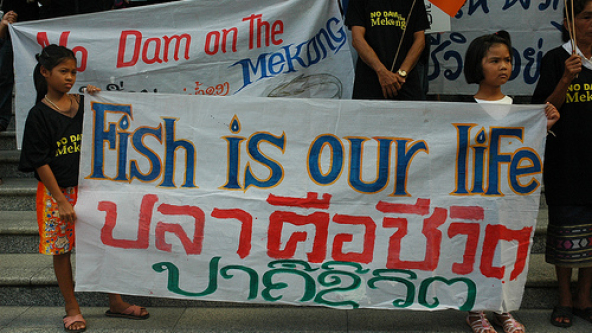 Coinciding with Ch. Karnchang's Annual Shareholders Meeting, dozens of protestors rallied in front of the company's headquarters in Bangkok on Tuesday, demanding a halt to all construction activities occurring on the Xayaburi Dam. Civil society groups and community representatives from villages along the Mekong River inside Thailand traveled hundreds of miles to make their voices heard. Together, their colorful affair helped to articulate the anger felt by many people whose lives and livelihoods would be impacted by the project.

"We are here today to oppose the irresponsible investment of Thailand's company in Laos. They see the Mekong as a project site to make profit, but they do not see lives. We are here today to tell them there are millions of us who will have to bare the cost of their dam," said Somkiat Kuenchiangsa from the Chiang Khong Conservation Group in Chiang Rai province.

Ch. Karnchang is under fire for blatantly disregarding the 1995 Mekong Agreement with their announcement last week to the Thai Stock Exchange that they had signed a $711 million construction contract with the Xayaburi Power Company. Ch. Karnchang also announced that construction on the Xayaburi Dam commenced on March 15th, 2012. This news came only months after the regional governments had agreed to postpone making a decision on whether or not to construct the project, in order to first study the transboundary impacts of the planned dams on the Mekong River.

"Ch Karnchang should stop building the Xayaburi dam and the four Thai banks that are financing the dam should immediately withdraw their investments. They need to be aware that if the dam goes forward, they will be negatively impacting the livelihoods of 60 million people who live along the river and rely on it for their survival," stated Changthamorn, a member of Community Council of Mekong Area in Nong Khai. "For the people from Cambodia, Vietnam and Laos who will be affected by the dam and are not here today, we are their voice, raising our protests to the companies that are building and funding the dam."

Tension has begun brewing regionally as business interests appear to have bypassed regional commitments and risk threatening the vitality of the Mekong River. Since last week's announcement by Ch. Karnchang, Cambodian officials have since stated that they may pursue legal action against Laos, if they unilaterally allow the Thai firm to proceed with the dam.

As the stakes rise, Ch. Karnchang's shareholders should not be at ease. This is especially true in light of the fact that there is no compelling justification for the project. While Ch. Karnchang has yet to carry out an assessment of the dam's transboundary impacts, scientific studies have shown the dam to be submerged in costs as the project will deplete fish stocks and block nutrient rich sediment from flowing to the region's rice fields.

Tuesday's protestors have thrown down the gauntlet to Ch. Karnchang: will they take their social, environmental and legal responsibilities seriously by dropping this project or will they continue on a downward spiral of risky and irresponsible corporate behavior?

Note: Tuesday's protest was organized by The Network of Thai People in 8 Mekong Provinces. After the protestors were able to submit a letter of their concerns to a Ch. Karnchang official, they moved their protests to Siam Commercial Bank's headquarters in Bangkok . As one of the four Thai Banks funding the project, the protestors then submitted a second letter calling for the bank to end its funding for the Xayaburi Dam.