Home › News
ING and AXA invest in the modernisation of white phosphorus weapons
The preparation of a new Fallujah?
By: Netwerk Vlaanderen
2006-03-13
Brussels, Belgium

Netwerk Vlaanderen is a member of BankTrack, an international movement for sustainability in the financial sector. 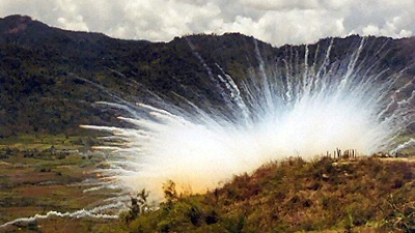 On 18th and 19th March, millions of people will take to the streets to oppose the war and occupation in Iraq. Demonstrations are planned in no less than 208 cities around the world, including New York, London, Jakarta, Sao Paulo and Brussels. The protests oppose, amongst other things, the use of “dirty weapons” in the war. One example is the US attack on Fallujah in November 2004, where the use of white phosphorus caused many civilian casualties. Since then, work has begun on the modernisation of the factory that makes white phosphorus weapons for the US armed forces.
Research from the organisations involved in the campaign “My Money. Clear Conscience?”  reveals that AXA and ING invest a combined total of $37 million in two companies responsible for renewing the production facilities for white phosphorus.

AXA and ING are playing with fire
Netwerk Vlaanderen and its partners today reveal that two international bank groups AXA and ING invest a combined total of $37 million in Teledyne Technologies and The Shaw Group. As we speak these two companies are modernising the white Phosphorous factory of the US army. Military use of white phosphorus is very controversial and has caused numerous civilian casulaties in Fallujah.
The investment of AXA Group in such practices is unfortunately not surprising. AXA group still has no policy regarding investment in weapons, and continues to invest in the producers of even the most controversial of weapons.
ING Group has already partly withdrawn from anti-personnel mines, cluster bombs, uranium weapons, biological, chemical and nuclear weapons. These investments in white phosphorus indicate the risks that banks take if they do not fully withdraw from the arms industry. Time and time again, investments will involve them in absolutely unacceptable practices, weapons or weapon sales.

New white phosphorus ammunition for the US armed forces
The white phosphorus weapons used by the US armed forces were produced by soldiers at the Pine Bluff Arsenal in Arkansas. Two US companies Shaw Environmental Inc. and Teledyne Brown Engineering  were awarded a contract in September 2005 and October 2005 to completely modernise the white phosphorus plant. They will be responsible for the design, assembly, integration, delivery and testing of a system for filling munitions with white phosphorus. Work will be completed by January 2007. These two companies are therefore involved in the production of new phosphorus weapons, and in this way are involved in the preparation for new war crimes against civilians.

Fallujah, an horrific story
In November 2004 the United States carried out a relentless attack on Fallujah, a city 70 km to the west of Baghdad, and a stronghold of the Sunni resistance to the occupation. At the time of the attack, there were between 50,000 and 100,000 people in the city. The US estimated that this included between 1,000 and 6,000 insurgents. At the end of January 2005, reports of the use of white phosphorus in the attack on Fallujah began to take on serious proportions. The US only admitted to the use of white phosphorus after the release of a shocking documentary on this subject by the Italian broadcaster RAI. Reports from US soldiers make it clear that these weapons were used directly against people. To say that the impact on the civilian population was terrible, is an understatement. Jeff Englehart, a US soldier who served in Fallujah reports how he heard the order for the use of white phosphorus on the military radio. He describes the consequences as follows: “Burned. Burned bodies. I mean, it burned children, and it burned women. White phosphorus kills indiscriminately… And when it makes contact with skin, then it's absolutely irreversible damage, burning of flesh to the bone.”

White phosphorus munitions: an attack on humanity
White phosphorus (WP) is a substance that can be used in a wide range of ammunition. It is often used to produce light or smoke. When the ammunition detonates, it produces a large amount of heat, combined with a yellow flame and a thick white smoke.
White phosphorus is also extremely toxic for humans, and in military use humans can be exposed to large doses. Exposure to WP causes serious burns, that can burn flesh to the bone. The inhalation of WP also leads to serious health effects or death.
When WP munitions are used in densely populated areas, it is impossible to avoid civilian casualties. The highly toxic phosphorus cloud spreads over a large area, contaminating the air, ground and water. The military use of white phosphorus is also in breach of International Humanitarian Law.

A press dossier is attached to this press release. You can also download the press dossier from http://www.netwerkvlaanderen.be/en/index.php?option=com_content&task=view&id=45&Itemid=187