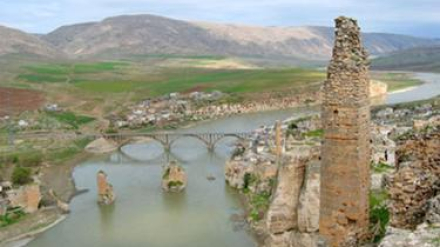 Construction work has restarted on the controversial Ilisu Dam in Turkey, despite the project lacking the appropriate permits. Work on the project had been stopped following the withdrawal of financial support by the export credit agencies (ECAs) of Switzerland, Austria and Germany earlier this year. The ECAs withdrew after Turkey failed to honour commitments to bring the project up to international standards.

The Initiative to Keep Hasankeyf Alive, a regional coalition opposed to the project, has now discovered that dozens of workers and many machines are have now recommenced work in the vicinity of Ilisu village, without official permission from Turkey's State Water Works (DSI). According to the Hasankeyf-Initiative, the DSI sent a letter to the consortium which has the contract from the project on 28nd October 2009 ordering it to stop the construction.

"We are asking the responsible minister for environment, Veysel Eroglu, what is going on? How is it possible that companies may build without any authorisation?" states Ipek Tasli, the international coordinator of the Initiative.

The villagers of Ilisu state that they were told to leave their houses by the end of November. They were told that they could buy new houses in the new settlement sites. These are however more expensive than the compensation they received for their current houses and it is unclear how they can restore their income in the new settlement. So the affected people have said they will move to the cities. A new wave of displacement will start soon unless the expulsion is stopped now.

After the withdrawal of the three European governments the minister for environment, Veysel Eroglu, claimed several times that Turkey would find another source of finance for the Ilisu Project, instead of reconsidering it. "There was no convincing position by the government for our region's development. We would like to know why the construction has started again. Is this in connection with the visit of the Turkish Finance Minister Mehmet Simsek in China in mid-September 2009?" asks the Initiative's European spokesperson Ercan Ayboga. "As we remember Mehmet Simsek said, when he was in China, that the Ilisu project was also discussed."

"Why is the Turkish government insisting on this project so much although it has limited benefits and alternatives for energy production and regional development have been presented by many different organizations and experts in the past years? Why does the government want to displace ten thousands of people, destroy a culture of 12,000 years and a unique large river ecosystem?" asks Tasli. "This is not in line with the ‘democratic initiative' to improve the situation of the Kurdish people which has been declared by the government in the last weeks and months. The Ilisu project stands in strong contradiction with the objectives of this initiative."

In July 2009, the export credit agencies for Switzerland, Austria and Germany withdrew their guarantees for the Ilisu Dam and Hydroelectric Powerplant Project in Turkey after protests of the affected region’s people and campaigns in West-Turkey and Europe. Immediately following this decision the three European Banks involved (Societe Generale, Bank of Austria and Dekabank) also cancelled their loans for the Ilisu Project. But the European companies of the Ilisu consortium – Andritz from Austria, Zueblin from Germany and Alstom from Switzerland – have not yet announced their withdrawal and the consortium continues to exist.