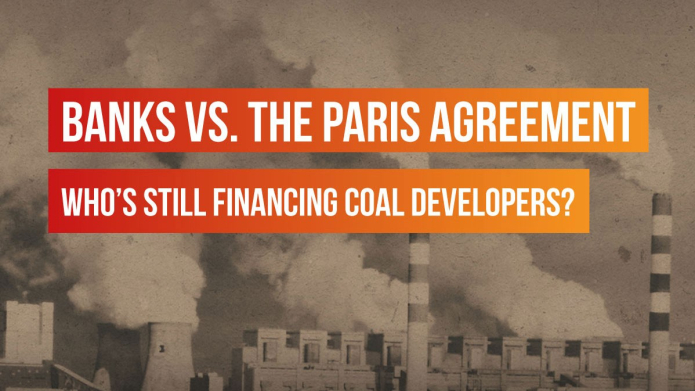 On the eve of the Paris Agreement’s second birthday, two new reports reveal how large banks and investors are actively undermining the Paris climate goals. The reports provide data exposing how, between January 2014 and September 2017, big banks provided US$630 billion in financing to the 120 top coal plant developers, and major institutional investors are currently investing close to US$140 billion in the same companies.

The complementary reports, ‘Banks vs. the Paris Agreement’ and ‘Investors vs. the Paris Agreement’ were launched by BankTrack, Urgewald, Friends of the Earth France, Re:Common and Rainforest Action Network at the Climate Finance Day in Paris. The reports examine banks’ and investors’ involvement with the world’s top 120 coal plant developers. These companies are responsible for 2/3 of the new coal-fired power stations planned around the globe and aim to build over 550,000 megawatts – an amount equal to the combined coal fleets of India, the United States and Germany.

Banks vs. the Paris Agreement

Bank financing of these companies in the period from January 2014 to September 2017 involved US$630 billion in lending and underwriting, with Chinese and Japanese banks responsible for 68% of the total. In the two years since the Paris Agreement was signed, banks have provided US$275 billion to the top 120 coal plant developers.

“We have seen China take important steps to begin reducing its domestic coal use. It now needs to rein in the money going to Chinese coal expansion overseas. If China wants to have a claim to climate leadership, it needs to stop the huge financial flows from its banks to coal plant developers,” says Yann Louvel, Climate and Energy Campaign Coordinator at BankTrack.

For lending the picture is quite different. The top two lenders to coal plant developers are the Japanese banks Mizuho Financial and Mitsubishi UFJ Financial with US$11.5 billion and US$10.2 billion respectively.

Shin Furuno, divestment campaigner from 350.org Japan says, “Mizuho Financial Group, Mitsubishi UFJ Financial Group and Sumitomo Mitsui Banking Corporation have provided US$25.3 billion to companies whose coal power plans threaten to put the 2°C goal out of reach. Japanese banks need to finally commit to lending policies that are in line with the Paris Agreement.”

Yann Louvel from BankTrack comments: “In spite of banks’ policies, the financing tap for companies aiming to build hundreds of new coal plants still remains very much open.Banks need to close that tap and start saying ‘No’ to coal plant developers”.

The report ‘Banks vs. the Paris Agreement’ is available at: www.banktrack.org/coaldevelopers

Investors vs. the Paris Agreement

The report “Investors vs the Paris Agreement” identified 1,455 institutional investors with overall investments of almost US$140 billion in the top 120 coal plant developers. “Our research investigated the portfolios of pension funds, insurance companies, mutual funds, asset managers, sovereign wealth funds and the asset management arms of commercial banks. Data availability, however, was a real problem as many pension funds do not report on their holdings. The US$ 139.6 billion of institutional investments we identified in coal plant developers are likely only the tip of the iceberg,” explains Schuecking.

“For BlackRock, its investments in coal plant developers are only a tiny part or its portfolio, less than 0.2% of its managed assets. For the rest of us, these investments are a giant step towards a de-stabilized climate and a 4°C world,” says Schuecking. The 52 coal plant developers in which BlackRock in many cases holds significant stakes collectively account for coal power expansion plans of 340,622 MW – this is equal to the combined coal fleets of India, Japan, South Korea and Russia.

All in all, investors from the US account for 37% of the institutional investments in coal plant developers. Next in line are EU and Japanese investors (13% each), Malaysian investors (9%), Chinese Investors (7%) and Indian investors (6%).

“Many of the top investors in our ranking are members of the ‘Institutional Investors Group on Climate Change’ or similar initiatives that regularly issue warnings about the threat climate change poses to our economy and societies. These are, however, the very same institutions that invest billions of dollars in companies with enormous coal power expansion plans. It is time that BlackRock, Vanguard and other global investors acknowledge the inconvenient truth that their own investments are accelerating climate change,” concludes Schuecking.

The report ‘Investors vs. the Paris Agreement’ can be downloaded at: https://coalexit.org/downloads

The reports were published to coincide with Climate Finance Day in Paris, which is meant to kick-start a global climate ‘stocktake’ process for the next UN climate summit in Katowice, Poland in December 2018.

NGOs from around the world are calling on banks and investors to take steps to exclude the top 120 coal plant developers from their portfolios by the time of the climate summit in Katowice in December 2018.