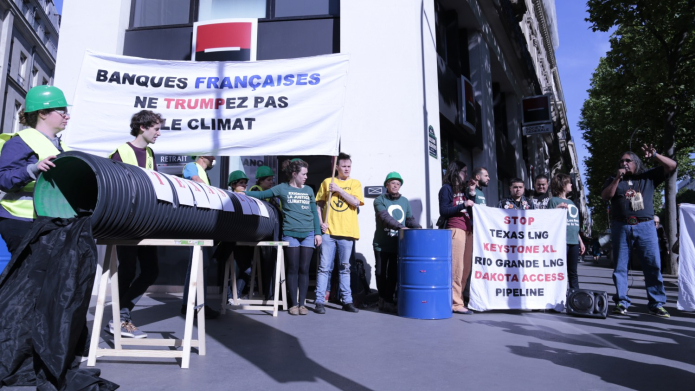 Pipeline protestors from the US and France combine outside branch of Société Générale in Paris. Photo: Claire Dietrich

This is an adapted extract, written by our colleague Alison Kirsch at Rainforest Action Network, from this year’s Fossil Fuel Finance Report Card concerning the frankly shocking level of disregard from the world’s biggest private banks for the human rights impacts of their fossil fuel investments. Check out also a dedicated case study in the report card itself covering the Dakota Access Pipeline (DAPL), the touchstone human rights disgrace of the last twelve months which shocked the world and finally thrust the topic into bank boardrooms. The following overview suggests that there could soon be more DAPLs coming down the track, unless the banks get their human rights and Indigenous rights policies in order.

Banks tout the positive contributions to society that they finance – local businesses, renewable energy, the arts – while at the same time skirting responsibility for the negative human rights impacts that they fund.

In January 2017, the Thun Group of Banks – Barclays, BBVA, BNP Paribas, Credit Suisse, Deutsche Bank, ING, JPMorgan Chase, Royal Bank of Scotland (RBS), Standard Chartered, UBS and UniCredit – published a discussion paper on how the U.N. Guiding Principles on Business and Human Rights should be applied to banks. The Guiding Principles set the standards for corporations on human rights, building on the “protect, respect, and remedy” framework.

The Thun Group’s interpretation stated that banks are not responsible for addressing adverse human rights impacts caused by the clients they finance, but rather only need to address what happens because of banks’ “own activities,” such as their hiring practices. It’s the same line banks have often used with regard to their fossil fuel finance, where they take responsibility for lowering the climate-changing emissions they produce with their own operations (by making their buildings more energy efficient, for instance) but shirk responsibility for the emissions they produce with their money (by financing dirty energy).

The Thun Group’s brazen rejection of responsibility for human rights impacts was immediately criticised by NGOs, academics and even the U.N.’s own Working Group on Business and Human Rights, forcing them into an embarrassing u-turn. In its critique, the Working Group posed a hypothetical that happens all too often – what if a bank “provides a loan for an infrastructure project that leads to widespread displacement of local communities, but for which no safeguards or mitigations were in place”?

Moreover, what if a bank provides general corporate financing to a company whose business relies on abusing human rights, or threatens the right of local communities to clean water or clean air?

It seems to be clear to everyone but the banks themselves that it costs money to abuse human rights – money that traces right back to big banks.

In 2016 through early 2017, the movement against the Dakota Access Pipeline (DAPL) brought to the fore banks’ appalling failures in respecting Indigenous Peoples’ rights. The importance of land, sacred sites and place-based resources to Indigenous Peoples is widely recognised in international frameworks such as the United Nations Declaration on the Rights of Indigenous Peoples, as well as by standard-setting financial institutions such as the International Finance Corporation, the World Bank’s private lending arm.

These standards enshrine the right of Indigenous communities to give or withhold their free, prior, and informed consent (FPIC), for development that impacts their land, resources, or cultural heritage in a variety of circumstances – and the requirement that companies secure that consent before proceeding with development projects.

The banks that lent money for the construction of DAPL engaged a law firm to make recommendations on engagement with Indigenous Peoples going forward. Yet only a summary of the report was made public, and though one of its purposes was to “advise the lenders to the Dakota Access Pipeline,” as Citi put it, the public summary notably does not include any recommendations for the banks, but rather only for pipeline companies. Moreover, the process was entirely non-transparent and ironically non-inclusive, given that it was purportedly intended to provide recommendations for consultative processes.

Many European and U.S. banks, including Crédit Agricole, Deutsche Bank and Bank of America, expect or require that their clients secure FPIC, but often without clarifying publicly their expectations and requirements. Others such as Royal Bank of Canada (RBC) and Morgan Stanley merely review consultation processes, while some banks like Barclays, Bank of Montreal and BPCE/ Natixis have no standalone language on FPIC whatsoever.

This lack of policy protection of FPIC remains not only a threat to Indigenous sovereignty, but also a reputational and financial risk to the banks.

By and large, bank human rights policies and processes do not align with the U.N. Guiding Principles on Business and Human Rights – according to a BankTrack analysis, 35 of 45 major international banks are less than halfway toward full implementation of the Guiding Principles.

There has, however, been some recent movement. For example, the entire Dutch banking sector signed an agreement on human rights last year, which includes among other things a commitment to promote FPIC. A few banks, including Citi and ABN AMRO, are beginning to report on their human rights impacts following the Guiding Principles Reporting Framework, with Citi’s report conceding that mistakes were made on DAPL and putting in place efforts to strengthen its human rights due diligence process in 2017 in response. And recent guidance from the UN that banks are expected to have their own complaints channels in place for communities affected by their finance, as campaigners have long called for, will hopefully drive further progress.

With increased focus on banks’ protection of human rights – or lack thereof – new policies need to be implemented, existing policies need to be strengthened to formalise commitments to FPIC worldwide, and banks need to show they are truly implementing these policies by avoiding finance for projects that trample on people’s rights.