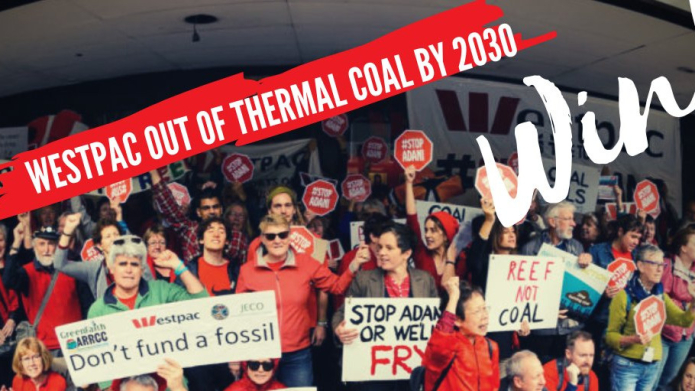 Westpac’s Climate Change Action Plan Update, released today, has been described as another nail in the coffin of thermal coal, by environment finance group, Market Forces.

The policy commits the bank to being out of thermal coal mining by 2030, while the emissions-intensity target set for the bank’s power generation lending, falling to 0.18 tonnes of CO2 per Megawatt-hour generated by 2030 effectively squeezes out new coal while making it almost impossible to finance new gas power plants.

“Westpac’s policy is another nail in the coffin of the thermal coal industry and a stark warning to a federal government trying to leverage the COVID-19 pandemic to give the fossil fuel industry a leg up. This plan shows it won’t be happening with Westpac’s cooperation”, said Market Forces Executive Director, Julien Vincent.

“Last year, Commonwealth Bank was the first to commit to be out of thermal coal by 2030, along with all three of our general insurers. Now, anyone trying to operate a coal mine or power station in Australia by the end of this decade will need to do it without Westpac as well.”

The bank also appears to have made a subtle commitment to not finance new oil and gas projects, indicating that any financing of the sector from this point on will need to be compatible with the Paris Agreement. To meet the Paris climate goal of limiting global warming to 1.5ºC, energy from gas must fall by 25% by 2030 and oil by 37% from a 2010 baseline according to the IPCC.

Market Forces is hoping this new policy reverses a disturbing trend in Westpac’s recent lending activity. Since 2016 Westpac has loaned USD 5.4 billion to coal, oil and gas projects including USD 846 million to projects that expand the scale of the fossil fuel industry. Since commiting the the Paris Climate Agreement, Westpac has loaned 2.7 times as much money to fossil fuels as to renewable energy.

Market Forces is now calling on Westpac to apply the same principles to corporate customers as it has done to projects. In recent years, Westpac’s corporate lending has included deals such as:

“Westpac’s policy comes out as we contemplate what sort of future we want for our economy. With the frailties of the coal, oil and gas sectors laid bare by the economic impacts of COVID-19, and the horror summer of bushfires still fresh in our minds, the time has come to move on from polluting fossil fuels once and for all”, said Mr Vincent.