Home › News
Wells Fargo's Human Rights Impact Assessment Leaves Shareholders Dissatisfied
A failure to publish the complete findings of the assessment has investors wondering about the integrity of the process and whether any learnings gleaned will inform much-needed reforms.
By: Interfaith Centre on Corporate Responsibility
2022-03-14 Contact: 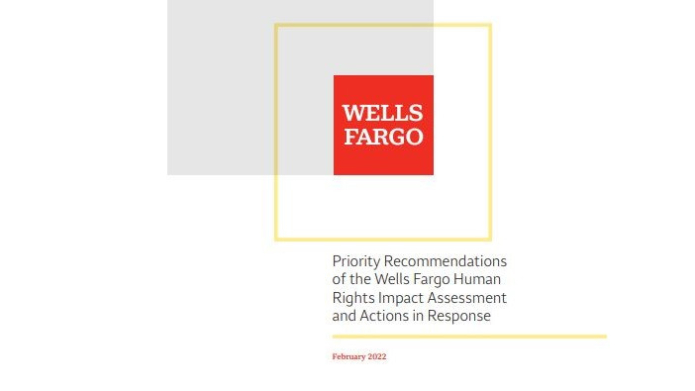 Shareholders in Wells Fargo who have been engaging the company for two decades around practices with the potential to harm stakeholders and customers, today announced their response to the company’s publication of a summary of its Human Rights Impact Assessment (HRIA).

The document was developed in response to shareholders’ call for an HRIA in alignment with the UN Guiding Principles on Business and Human Rights (UNGPs) to assist the company in identifying potential human rights harms impacting its key stakeholders, primarily WF customers, as a result of the company’s numerous and very public ethical and oversight lapses.

Wells Fargo agreed to undertake the assessment and hired an independent consultant, Foley Hoag, to assist in the process.

The investors say the document Wells Fargo delivered – a topline summary, not a full HRIA – falls dramatically short of their expectations. Not only is the information incomplete, but there is also no transparency about the due diligence process undertaken and no way of confirming whether all the recommendations made by Foley Hoag are being considered. Critically absent from the document, say investors, are the voices of Wells Fargo stakeholders who have suffered human rights harms.

Said Sr. Nora Nash of the Sisters of St. Francis of Philadelphia who leads ICCR’s engagement with Wells Fargo, “We encouraged the company to identify and assess the most salient human rights risks across its enterprise. Unfortunately, the final report did not identify the salient human rights impacts, was not grounded in an international human rights framework, and its process lacked the voice of stakeholders. Candidly, we couldn’t be more disappointed.”

ICCR members have been raising concerns about egregious ethical and cultural lapses at Wells Fargo since 2001 including the filing of shareholder proposals citing predatory and discriminatory lending practices, the marketing of credit cards to subprime consumers, and the fraudulent opening of credit card accounts for millions of its customers. These practices resulted in over $1 billion in fines from the Consumer Financial Protection Bureau and, investors argue, reputational damage that is of material consequence for shareholder value.

A 2017 resolution filed by ICCR members resulted In the publication of Wells Fargo’s Business Standards Report which, according to Wells Fargo, was intended to “improve our culture, make things right for customers who were harmed, transform our organizational structure and business practices, increase transparency, and strengthen risk management and controls.”

Said Cathy Rowan, representing the Maryknoll Sisters, “Wells Fargo speaks of its commitment of always ‘looking forward by finding solutions and removing barriers to help our customers’. We do not feel that the solutions described in the HRIA sufficiently recognize the bank’s obligation to uphold and respect the rights of stakeholders, nor indicate how these solutions will remove the barriers that have caused harm. We don’t see this as a good sign that Wells Fargo has reformed and learned from its past mistakes.”

The most critical failure of the document say investors, is the absence of the impacted stakeholder voice which is foundational for an impact assessment based on the UNGPs.

Said David Schilling, ICCR’s Senior Advisor, “This product, regrettably, will not empower the rights-holders who were interviewed in this process to hold the company to account. Not only is it a disservice to the individuals who spent their time and emotional energy sharing their stories and perspectives on the harms they have suffered as a result of Wells Fargo’s practices, it is a missed opportunity for Wells Fargo to reform its business and join leading companies that have done serious impact assessments.”

“Wells Fargo has not changed its behavior as is now flouting the CARES Act for federally backed loans and is failing to properly comply with GSE and FHA loss mitigation guidelines for borrowers negatively by Covid-19,” said Beth Jacobson, a former Wells Fargo employee who now advocates for impacted customers. “How many borrowers must lose their homes due to Wells Fargo's putting profits above human rights?”

In a separate engagement, investors requested that Wells Fargo conduct a racial equity audit but the company argued the audit wasn’t necessary because it had already agreed to the HRIA. ICCR members say that this argument is another example of how the company is skirting responsibility for the due diligence necessary to ensure stakeholders aren’t harmed.

Observed Nash, “A retail bank with a footprint as vast as Wells Fargo needs to put its customers first because when it doesn’t it can have powerful impacts on families, communities and, more broadly, on our country’s economy. From my experience working with impacted customers who either lost their homes or were financially devastated due to unfair loan modifications, it is clear Wells Fargo has not recognized the economic and emotional toll it has taken on customers. An authentic human rights impact assessment shouldn’t be a one-off, but rather an ongoing evaluation that allows companies to ensure the rights of their stakeholders are respected and prioritized.”