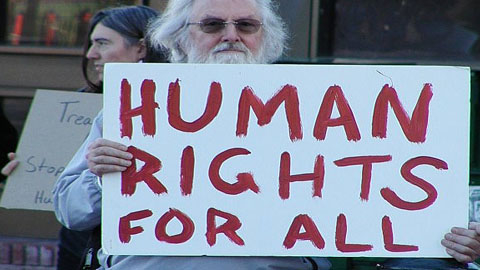 During the AGM, critical shareholders will question ING about investments in companies that are involved in human rights violations. Recent research demonstrates the financial links between ING and companies that have been criticised due to practices such as support for dictatorial regimes, forced relocations of population, and forced labour. This is published in the report ‘Where do you draw the line? Research into the financial links between five bank groups and companies that violate human rights’, was conducted by Netwerk Vlaanderen, a Belgian organisation promoting sustainability in the financial world.

ING invests in thirteen of the fourteen companies mentioned in the report, with a combined value of more than US$ 1.3 billion. The investments of more than US$ 600 million in both Wal-Mart and Total are striking.
ING has financed the BTC pipeline and the Trans Thai-Malaysia pipeline. The first amount is unknown, the second is worth US$ 19.55 million. ING is also on the shortlist of banks that could become ‘lead arranger’ for the financing of the Sakhalin II gas project in Russia. These projects have been criticised because of the support for undemocratic regimes, the fuelling of regional conflicts, the violation of human rights, and environmental damage.
Support for dictatorships
ING invests more than US$ 600 million in Total and other companies with important activities in Burma. Total currently has investments in a gas pipeline in Burma, a land that is ruled with an iron fist by a military junta. Total refuses to pay attention to the international call for disinvestment. The company uses Burmese soldiers, known for their extreme brutality, to clear and protect the route of the pipeline. This Total project ensures a substantial income for the military rulers of the country. The oppression of the local population is strengthened by the activities of Total. Aung San Suu Kyi, leader of the democratic opposition and winner of the Nobel peace prize, has referred to Total as the greatest supporter of the military dictatorship in Burma. However, ING appears to have no problem with investing in this company.
Violations of workers’ rights
ING invests more than US$ 600 million in Wal-Mart. This US distribution chain is widely known for its continued breaches of basic workers’ rights. Wal-Mart has been condemned for breaching the child labour laws in its warehouses. In the United States there are still dozens of cases pending against the company for 'union-busting'. The management registers, threatens and illegally fires trade union activists. Trade unions are not welcomed by Wal-Mart, and Wal-Mart has already been found guilty of ‘union busting’ on a number of occasions. Poor conditions are also routine in the subcontractors of Wal-Mart, which advertises itself using the slogan ‘Always Low Prices’. Wal-Mart doesn't seem to take much notice of these criticisms. The company has hardly taken any action to improve these terrible working conditions. Wal-Mart continues to be far behind other companies in this respect. However, ING believes that investing in Wal-Mart is perfectly reasonable.
Human rights abuses related to infrastructure projects
ING is also heavily involved in large-scale projects that have been linked to human rights abuses. One example of this is the BTC pipeline, that runs through Turkey, Azerbaijan and Georgia. The project has been called into question because of the support for undemocratic regimes, the fuelling of regional conflicts, the violation of human rights, and environmental damage. Many communities protested against these practices, but the protests were heavily repressed in all three countries. The consultation with the affected communities left a lot to be desired. Those making their criticisms of the pipeline public were often the target of serious repression, arrest and intimidation by the authorities. This is not surprising given the human rights situation in each of the countries. Despite these problems, ING sees no problem in financing the BTC project. Multiple protests against the bank’s involvement in the BTC project have been ignored.
Towards a watertight human rights policy
Savers and investors cannot judge the human rights profile of their bank group without clear information. Therefore, the critical shareholders will question ING about its human rights policy. They support Netwerk Vlaanderen’s demand towards the banks to make their human rights policy public, along with a list of the companies and governments in which they are investing.
Netwerk Vlaanderen asks that the bank groups investigate and put an end to their investments in companies that are accused of serious breaches of human rights.
The complete report goes into much more detail regarding these challenges for the bank world, and gives a number of concrete steps that can be taken to achieve a more watertight human rights policy.
End press release