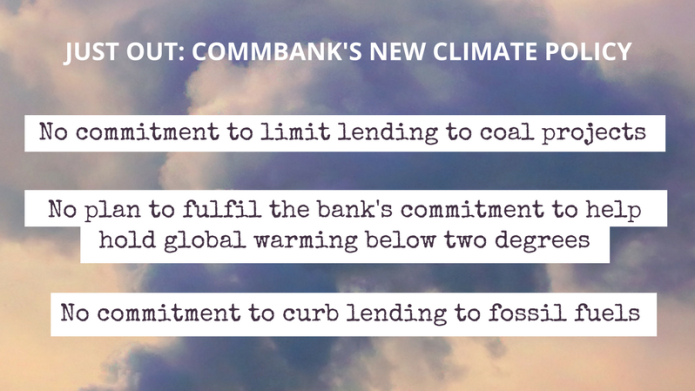 Shareholders have lodged a first-of-its-kind resolution with Commonwealth Bank that would embed climate change risk management into its constitution. It comes a month after shareholders began court proceedings against the bank over its failure to consider climate change as a material business risk.

The resolution, coordinated by environmental finance group Market Forces, would ensure Directors operate the company in a manner consistent with the goal of holding global warming to below two degrees.

CommBank remains exposed to a myriad of physical, transition and legal risks from climate change, exacerbated by its continued heavy lending to fossil fuels and acknowledged lack of consideration of risks such as the impact of sea level rise on the property market.

“CommBank has made it perfectly clear it lacks either the intent or capacity to adequately manage climate risk”, said Market Forces Executive Director Julien Vincent.

“Avoiding runaway climate change will be fundamental to economic and financial stability over the coming decades. CommBank is Australia’s largest company and embedding climate change risk management into its constitution will increase its resilience and position the bank to take full advantage of the opportunities created by the transformation to a low carbon economy”.

Research from Market Forces shows that since Commonwealth Bank first committed to support the goal of holding global warming to below two degrees, it has loaned $6 billion to fossil fuels, more than four times its renewable energy lending.

It has also financed several new fossil fuel projects that, over their lifetimes, would add another 2.8 billion tonnes of CO2 to the atmosphere, effectively cancelling out Australia’s 2005-2030 greenhouse gas abatement target twice over.

“As such a huge part of Australia’s economy, CommBank needs to take the common sense approach of embedding climate change risk management into its DNA.”