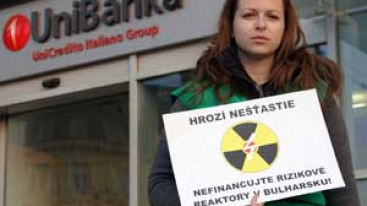 Say no to Belene and join the protest

European Energy Commissioner Andris Piebalgs is sitting in the hot seat. In the coming weeks, the Commission is expected to issue an opinion on the Belene nuclear power project (NPP) in Bulgaria. If the project is approved, it would clear the way for the Bulgarian government to apply for loans from public institutions such as Euratom and the European Investment Bank. Jan Haverkamp from Greenpeace remarks: “This will be a landmark decision since Euratom has not provided a loan for the construction of new reactors in more than 20 years. And it would be the very first time it supports the construction of Russian reactors within the EU.”

NGOs from throughout Europe are therefore mobilizing citizens to write to the European Commission. “Belene is one of the most dangerous and controversial NPPs in the pipeline and we are alarmed to see the Commission ignoring the project’s immense safety risks,” says Heffa Schücking from the German NGO Urgewald.

The Facts on Belene
The plan to build a nuclear power plant (NPP) near the town of Belene in northern Bulgaria goes back to the early 1980s. Even then, Soviet scientists warned that this site is seismically active and thus unsuited for a nuclear power station. During the last large earthquake in the region, over 120 people died just 14 kilometres from the planned NPP site. In the early 1990s, Belene was scrapped and the first democratically elected Government in Bulgaria determined the project to be “technically unsafe and economically unviable”. This was shortly after the Bulgarian Academy of Sciences issued a 421-page study, which came to a negative assessment of the project and specifically warned against the seismic risks of this location.

In 2002, however, the Belene project was revived, and in 2006, the Bulgarian government awarded a contract to the Russian company Atomstroyexport to build two reactors of a new design in Belene. The so-called Russian AES 92, or VVER 1000/466B reactors have not been licensed anywhere in the world, and there is no safety assessment or operational experience for this reactor type. One of the leaders of the Bulgarian NGO coalition BeleNE!, Albena Simeonova says: “I’m amazed that our government is willing to pay up to 7 billion euro to turn our country into a testing ground for the Russian nuclear industry. I hope that the EU will not support this plan.”

Private Banks Pulled Out
Private banks have largely been reluctant to provide loans for Belene. Recognising the project’s immense reputational risks. Banks from Germany, Italy, Switzerland and the US all declined loan applications for Belene in 2006. In fact, the only bank known to support it (albeit with a small loan) is the French bank BNP Paribas. In reaction to a wave of NGO protests throughout Europe, Badouin Prot, CEO of BNP Paribas, promised that his bank would not provide further loans for the project. Whether or not BNP Paribas keeps its promise, Belene is definitely in financial dire straits as the project will require an enormous amount of capital – estimates are currently around 7 Billion euro.

If the Commission, however, gives its approval, Belene would be eligible to apply for loans from Euratom and the European Investment Bank. This in turn could increase the likelihood of private banks re-entering into the project.

“If the Commission wants to secure the health and safety of European citizens, it should not issue a positive opinion on a project, which soviet scientists, former Bulgarian governments and numerous commercial banks all assessed as negative,” says Heffa Schücking of Urgewald. “Europe’s public and private banks must stay away from a project that will put millions of European citizens at risk,” she adds.

Urgewald, Greenpeace, CEE-Bankwatch, BankTrack, Friends of the Earth and many other NGOs are currently mobilizing protest emails to the European Commission. Join the protest and write to the Commissioners of the European Union.