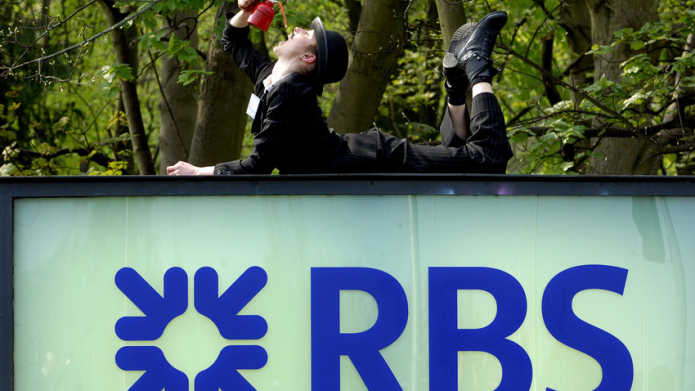 New research has revealed that Royal Bank of Scotland's 2012 carbon emissions could be up to 1,200 times higher than the figure reported by the bank, and 18 times the total emissions of Scotland. The study by the World Development Movement estimates that emissions resulting from RBS's loans to coal, oil and gas companies bring the bank's 2012 carbon footprint to up to 911 million tonnes of CO2 equivalent. The much smaller figure of 735,000 tonnes reported by the bank includes only its direct use of fossil fuels and electricity, and business travel.

RBS made loans of over £45 billion to fossil fuel companies and energy finance companies between 2008 and 2012, making it one of the UK's biggest financers of high carbon energy. At least £43 billion of these loans were still active at the end of 2012. In comparison, the bank lent just £167 million for renewable energy in the same year.

The World Development Movement says the new figures are evidence of the extent to which the UK finance sector is bankrolling climate change.  The campaign group is calling on the government to force banks, pension funds and other finance companies to publish the emissions from the coal, oil and gas extraction they finance worldwide.

New rules coming into force in October mean companies like RBS will be obliged to report the carbon emissions from their own energy use, but will not have to tell the public about emissions from the dirty energy projects they finance.

"RBS's true carbon footprint dwarfs the emissions not just of Scotland where it is headquartered but of the whole of the UK. And RBS is just one example. All of the UK's big banks are fuelling climate change by financing the continued extraction of coal, oil and gas around the world, and they are not going to quit unless they are forced to by regulation. We need tough government action to wean the UK finance sector off dirty energy, and making banks come clean on the emissions from the fossil fuels they finance would be the first step."

Read the study, ‘RBS's true carbon emissions 2012:  An estimate of emissions resulting from energy loans made during that year, and the shortcomings of the existing reporting framework', by the World Development Movement.