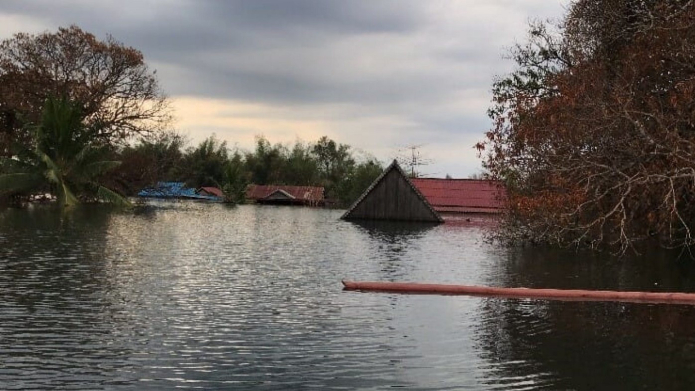 Photo of the Srekor village in Stung Treng, Cambodia, taken by a local resident.. Photo: Via Oxfam

Also see the blog on Medium.com which accompanies this news release: "Financial Intermediary sub-project data exposed for the first time".

A coalition of organisations has published a new database today revealing $38.2 billion worth of investment and financial relationships – including “high-risk” projects – that involve 318 financial intermediary clients of Dutch development bank FMO and the World Bank’s private lending arm, the IFC.

The organisations that crunched the database numbers are Oxfam, economic research agency Profundo, the International Accountability Project and the Early Warning System.

The database is important in countering claims by big development institutions like FMO and IFC that such information is “commercially confidential” and that it is too difficult for them to meet the levels of transparency demanded by civil society and local communities who may be harmfully affected by these lending projects.

The database reveals the destination of investments from FMO and IFC-funded clients across at least 76 countries from 2017-20. In total, the database tracks the money flows from FMO and IFC down through the 318 financial intermediaries to 12,800 private actors.

The IFC and FMO are both heavily involved in this growing form of development financing, where development banks invest directly into third-party “financial intermediaries” like hedge funds and commercial banks via loans, equity and guarantees, on the premise it will extend their financial reach and raise standards. In 2020 around 60% - or $6.7 billion – of the IFC’s entire investment portfolio was exposed via financial intermediaries, and around 40% or €3.7 billion for the FMO.

However, these financial intermediary clients of IFC and FMO invest in different development activities down-stream, including “high-risk projects” with the potential to harm people and the environment such as companies involved in mining and oil extraction projects.

There is growing evidence of such harmful projects like the Lower Sesan 2 dam in Cambodia that flooded out entire villages and the New Liberty Gold Mine in Liberia which displaced people, exacerbated poverty and polluted local water sources. These projects were funded via FMO or IFC intermediary clients, but affected communities were not adequately consulted or given access to information in order to seek redress.

“FMO's lack of transparency about their investments in financial institutions makes it impossible to monitor whether environmental and social standards are being enforced. The lack of clarity about where FMO's money ends up makes it very difficult to determine the impact of these investments. But above all, it means that local communities affected by risky or harmful projects    are unable to find out who is behind the investments, what protection they can demand and where to find redress,” said Imke Greven, land rights expert Oxfam Novib.

“Local communities do not have access to this kind of information about financial flows. Access to such information is a human right in itself and this database can play an important role in that. Failure to publish such information by development banks and their financial intermediaries is a choice. This newly developed database shows that it is possible,” said Ryan Schlief, Executive Director International Accountability Project.

“It is appalling that development finance institutions still don’t disclose such basic information. There is no reason for them to make it so hard to allow access to such basic information when they should have it as part of their due diligence and make it accessible,” said Christian Donaldson, Senior Policy Advisor at Oxfam International.

“Last year, the IFC became the first institution to commit to disclose this information on its website, even though we are still waiting for that to happen. We strongly encourage other development finance institutions to follow suit. This database shows it is perfectly possible to do so,” Donaldson said.

“For NGOs to develop this database is a time-consuming and costly process due to the limited resources and limited information available to them. As such, the database represents only the tip of the iceberg since researchers don’t have access to the internal accounts of the financial institutions and the resources available to the development banks. The research has shown that it is possible to provide detailed financial intermediary disclosure. Now it is up to the DFIs to do so themselves,” said Ward Warmerdam, Senior Financial Researcher, Profundo.

You can explore and access the data through the Early Warning System platform.