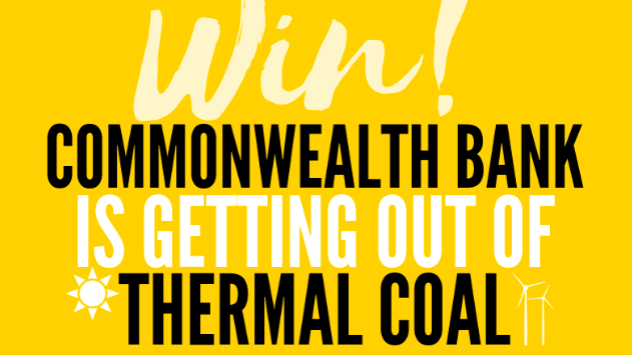 In today’s commitment, made in the bank’s new Environmental and Social Framework, to exit thermal coal by 2030, Commonwealth Bank has issued a stark warning to industry and policy-makers that coal has no place in Australia’s future.

Commonwealth Bank’s announcement follows recent commitments by insurers QBE and Suncorp to exit the thermal coal sector by 2030 and 2025, respectively.

“Anyone planning to run a thermal coal mine or coal power station in Australia beyond 2030 must now contend with not being able to get finance from Australia’s largest financial institution or insurance from our two main underwriters,” said Market Forces Executive Director, Julien Vincent.

“The exit of Australia’s largest company from coal should be a signal loud enough to be heard by the industry bosses and politicians who have their fingers in their ears over the need to decarbonise the economy,” said Vincent. “Now Australia’s other big banks need to step up and show the same kind of intent to get out of coal.”

Commonwealth Bank’s policy reflects a dramatic turnaround from a bank that has lagged behind its peers on policy to restrict fossil fuel lending, and been one of the heaviest lenders to coal, oil and gas.

In the two years following the Paris Agreement being signed, Commonwealth Bank loaned at least $7.2 billion to coal, oil and gas companies and projects. Many of these projects were new or expansionary, and would add another 2.9 billion tonnes of CO2 to the atmosphere over their lifetimes, enough to cancel out the gains made by Australia’s carbon reduction commitments three times over.

“There is no doubting the significance of this announcement,” said Vincent. “Commonwealth Bank’s clients will need to think twice about whether they are going to have the support of the financial sector to run their businesses in a way that undermines the Paris Agreement on climate change.”

Market Forces is, however, calling on Commonwealth Bank to eliminate potential loopholes over financing new coal, oil and gas projects.

“The Intergovernmental Panel on Climate Change (IPCC) states oil, coal and gas need to decline to meet the goals of Paris, and International Energy Agency (IEA) head, Fatih Birol, has said we can not afford to build any new CO2 emitting infrastructure,” said Vincent.

“There’s no wiggle room. Commonwealth Bank should publicly recognise that under the Paris Agreement, there is simply no space to expand the fossil fuel industry, full stop.”