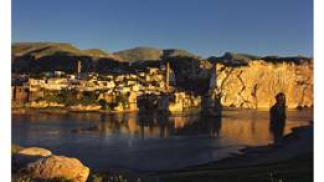 We, the Initiative to Keep Hasankeyf Alive, call on all concerned individuals and organizations to participate in and support our planned 'Hasankeyf Solidarity Camp' which will take place on 11-17 October 2010 in Hasankeyf in the Tigris Valley, which is threatened by the construction of Turkey's destructive Ilisu Dam Project.

The Ilisu Dam project will submerge the magnificent cultural and natural richness of the ancient city of Hasankeyf and severely impact the Tigris Valley downstream. Some 75.000 thousand will be evicted to make way for the project. Construction work has been going on since the spring of 2010 in the village nearest to the dam and in a resettlement site at "New Hasankeyf". In spite of protests by the affected local peoples and widespread criticism from people and organizations both in Turkey and internationally, this destructive project is still being carried out!

The Turkish authorities initially sought - and obtained - finance for the dam from international financial institutions. However, as a result of both the strong protests against the project, and the failure of the Turkish authorities to abide by agreed international standards for such projects, European companies, banks and governments declared that they would withdraw their financial and participation support in July 2009. In the following months, Turkey failed to obtain finance for the Ilisu project - one of the most controversial and contested dam projects currently planned internationally - from the Chinese government or from the companies involved in the project. Despite this, three Turkish banks (Akbank, Garantibank and Halkbank) agreed to fund the dam, whose construction has now become a matter of prestige for the current Turkish government, in January-February 2010. Four Turkish companies and Austria's Andritz remain in the project. Beyond that another critical development is the measure taken after a rock fall on July 13th, 2010 in the old bazaar of Hasankeyf whereby a person died: The ancient city ofHasankeyf is completely closed to any visits which is the first step of "unmanned Hasankeyf policy", a pre stage for depopulation.

So our struggle against the Ilisu project, which will destroy the livelihoods of 75 thousand people and flood forever the 12.000 years-old cultural-natural heritage of Hasankeyf, a site which meets the nine out of ten UNESCO World Heritage criteria, and drastically alter the rich eco-system of the Tigris with its myriad species of flora and fauna, has entered to its final phase.

Other dams in Turkey have previously destroyed the towns and cultural sites of Samsat, Halfeti, Zeugma and Hallan Cemi - all for a tiny amount of electricity production. Now other similar destructive projects are being constructed in Hasankeyf, Allianoi, Munzur and the Black Sea Region. If we do not stand up against these projects, we will end up losing these treasures too.

Even though at first almost everyone considered our struggle unrealistic, our campaign, based on "protection against destruction", "living in harmony with nature against being separated from it", "local development against migration", "production against consumption", and "solidarity against individualism", has managed to halt the Ilisu Dam project twice. Despite the fact that the construction works has once more restarted, we call, with the faith of having the power to cancel this project, everyone from the Black Sea to the Mediterranean, from the Aegean toMesopotamia and concerned people all over the world to participate in the October camp and build solidarity with our struggle.

Local communities, cultures and natural resources should not be destroyed for the economic benefits of vested interest groups! The conservation of Hasankeyf and the Tigris Valley - which have become very important symbols in our country against the destruction caused by Turkey's current dam-building policy - should be seen as our common mission...

Let us carry Hasankeyf to the future, instead of to its planned resettlement area!

Therefore, for the purpose of building solidarity with Hasankeyf, we will organize a solidarity camp in Hasankeyf on the Tigris River on 11-17 October 2010. We invite you to participate to this camp to get your support and reflections for our struggle