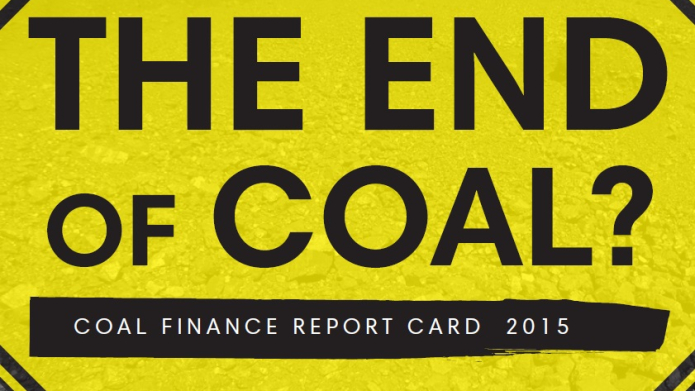 At a time when declarations about "the end of coal" abound, leading financial institutions have continued to put billions of dollars into coal mining and coal-fired power, despite dire warnings from climate scientists that we must end coal use immediately to avert catastrophic levels of global warming.

Global banks collectively financed $141 billion for coal mining and coal power companies in 2014, according to the annual coal finance report card released today by BankTrack, Rainforest Action Network and the Sierra Club. The findings in the 2015 report card indicate that, despite a dismal long-term financial outlook for the coal industry, banks have thus far been willing to prolong the demise of coal in the service of short-term profits - and at the expense of the global climate.

This year's report card, entitled "The End of Coal?", does identify some bright spots in coal finance, with a critical mass of banks saying "no" to particularly destructive coal mining projects and practices, including proposed development of the Galilee Basin in Australia, and mountaintop removal mining in the United States. In addition, in 2014 key financial industry voices concluded that the shift away from fossil fuels has reached a turning point, with Goldman Sachs concluding that coal for power production has "reached its retirement age" and Bloomberg New Energy Finance marking the "beginning of the end" for fossil fuels.

But despite these pronouncements, the end of coal will not come soon enough to limit climate change to internationally-agreed upon safe levels, unless banks act to drastically and rapidly end financing for coal.

Ben Collins, Senior Climate and Energy Campaigner at Rainforest Action Network, said: "Many leading banks have acknowledged that financial institutions have a responsibility to usher in the transition from fossil fuels to renewable energy. Unfortunately, the same institutions that frequently tout their clean energy investments and LEED-certified headquarters are also keeping the coal industry on life support at time when climate scientists tell us we need to leave almost all coal in the ground, starting immediately, if we want to keep climate change to levels compatible with ongoing human civilisation.

"We saw some signs of progress in 2014 with banks steering clear of some particularly egregious mining projects and practices, like Australia's Galilee Basin and mountaintop removal mining in the U.S. Appalachian region. But unfortunately it's not enough. We need banks to respond with leadership to the existential threat posed by climate change. Coal will die one way or another, but if banks wait to ditch coal until the market forces them to, the death of coal will come too late for the climate."

Yann Louvel, BankTrack's Climate and Energy Campaign Coordinator, said: "Looking at the slow evolution of bank policies related to the environmental and climate impacts of their coal financing, this year's report card is showing some positive signs of individual steps forward here and steps forward there.

"However, with time fast running out for proactive climate action to have any meaningful effect, the banks are basically fiddling with their policies while more and more coal burns as a result of entrenched levels of coal financing. It's outrageous for some banks to be hitching themselves to this year's UN climate negotiations in Paris as 'climate leaders' while they are not prepared to pull out of all coal sector financing, end of story.

"The banks' attention to the human rights considerations that are always involved in coal sector financing are patchy at best, and amount to little more than lip service to the UN human rights obligations that so many of them are signed up to. For as long as these banks continue to be coal industry supporters, they have to substantially beef up their human rights due diligence to protect communities in the industry's firing line around the world."

Bruce Nilles, Senior Campaign Director, Beyond Coal at the Sierra Club said: "While there is demonstrated progress on the part of financial institutions, it's too little and too slow moving if we're to see any real impact on the climate disruption or public health. Banks need to better own their role and more actively harness their influence to transition off dirty energy sources."

Key findings from the 2015 report card:

• In spite of the financial distress faced by the coal industry overall, banks have approached financing decisions in a piecemeal fashion, with global financing for coal mining and top coal-fired power companies holding steady at $141 billion, compared to $145 billion in 2013.