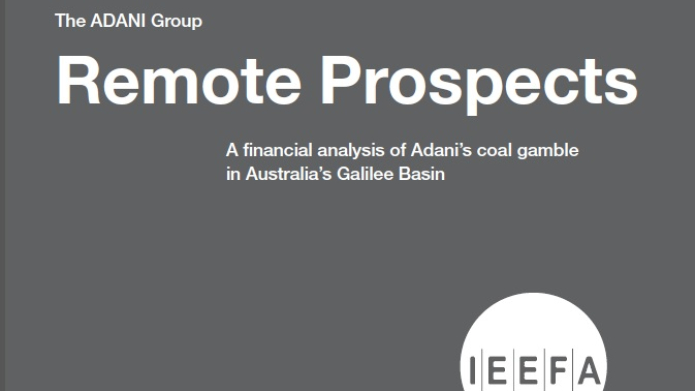 Report co-author, IEEFA's Tom Sanzillo, former first deputy comptroller of New York said, "Our conclusion is that Carmichael presents a picture of unacceptable risk. It's a high cost coal product in a low cost market in structural decline. The project is uneconomic by any measure," said Mr Sanzillo.

"This project is on the wrong side of the coal boom. It might have been viable 5 years ago but the market has moved on. Adani bought in at the peak of the coal cycle but failed to predict the structural decline of coal," Mr Sanzillo said.

"Adani is now overextended with unrealistically ambitious expansion plans, has no successful history of coal mining, has lost share value in critical segments, and is over-leveraged, with $US12bn of debt against external market capitalization of $US5.17bn. It is in not in a strong position to complete this project."

Key findings of the report include:

Report co-author Tim Buckley, independent financial analyst said, "Our analysis shows a systemic problem with the financial viability of coal mining in the Galilee Basin. Adani may have thought they were buying a coal mine, but it is increasingly likely that they have inadvertently bought themselves the world's most expensive cattle station."

"The Queensland government's recent announcement of a royalty holiday for the first movers in the exploitation of Galilee coal signals to the market that these high-cost greenfield projects in Queensland are unviable from an investment perspective."

Erland Howden, Energy Campaigner Greenpeace Australia Pacific, which commissioned the report, said, "It is clear that the Carmichael project, if developed, will be an environmental and climate disaster. This report shows that the project is also uneconomic."