Home › Projects
Sombwe Dam Congo, the Democratic Republic of the A herd of zebras in Upemba, the national park in which the dam project is planned. Photo: Rodrigue Katembo/ICCN Upemba

In June 2019, PowerChina and the Congolese company Kipay Investments Sarl signed a joint venture for the construction of the 150 megawatt (MW) Sombwe hydropower plant in the DRC. The proposed USD 400 million Sombwe complex includes a dam, reservoir, and road works. The hydropower plant is located inside Upemba National Park, one of the country's oldest national parks, known for lions, leopards, buffalo, elephants, among other characteristic megafauna. The project would have permanently damaging impacts on the outstanding values of the Upemba National Park's fragile ecosystem and wildlife.

NGOs call for halt to illegal activities in national parks

The proposed Sombwe dam presents unacceptable risks to water, biodiversity, natural habitats and the local livelihoods of thousands of families. Furthermore, the project is illegal due to its location in a Congolese Protected Area.

Kipay and PowerChina should not proceed with this project and banks should not provide finance for this project. Instead the companies should seek other suitable alternatives outside the Upemba National Park and the banks should seek to finance genuine renewable infrastructure to help meet the region's energy needs. This should be done in a legal and rights-compatible manner, complying with the host country law, and should ensure the protection of global biodiversity.

Loss of livelihoods The degradation of the environment of Lake Upemba and its depression could potentially become one of the main causes of a food crisis for nearly 80,000 fishermen who are settled with their families in this conservation area. Fish contribute significantly to local diets, livelihoods, and poverty reduction in general. The risks to their livelihood sources could lead to the economic displacement of a vast number of people, and have disastrous effects on thousands of communities.

Community conflict, intimidation and bribery Park staff who have voiced concern regarding the environmental and social impacts of the dam since 2015 have been offered bribes in exchange for their silence, and have even faced death threats. Staff of the Congolese Institute for the Conservation of Nature, ICCN, have been attacked, and a local civil society group has claimed in a statement that staff from Kipay Energy have played a role in encouraging the attacks as well as organising demonstrations in favour of the dam and against conservationists working to protect the Upemba National Park.

Lack of consultation The project developer has failed to design a consultation process based on free, prior, and informed consent, per international best practice. No broad consultations with the population have been conducted.

Conservation and biodiversity In contrast to the typical tropical forests of the Congo, the habitats of the Upemba National Park range from highland steppe/high altitude grasslands through miombo and savannah woodland, to flooded grassland and a network of rivers, waterfalls, wetlands and gallery forests. The Lufira River and Lake Upemba form a critical watershed for the region. At the time of gazettement (acquirement of legal protection) of the Upemba National Park in 1939, it contained signficiant populations of elephants, black rhino, buffalo, lions, leopards, wild dogs, and large herds of plains games including many endemic species. The swamps, shallow lakes, and river channels of Upemba host a relatively rich aquatic fauna. The area has great tourism potential due to the combination of remarkable scenery, wildlife potential, and relatively easy access and stability in the DRC context.

In June 2016, the Congolese Institute for the Conservation of Nature (ICCN) created the Upemba-Kundelungu Complex, comprising Upemba and Kundelungu National Parks, their annexes and contiguous hunting areas. In July 2017, ICCN signed a 15-year contract with the Forgotten Parks Foundation (FPF) for its management, rehabilitation and development. The Upemba-Kundelungu National Parks Complex forms an integral part of the broader Lufira River Basin (a 44,709 square kilometre Ramsar Site).

The creation of a hydroelectric plant and associated infrastructure in this national park will have a number of significant impacts upon biodiversity. It will result in the loss of around 60 km2 of forestry land. It will also potentially cause changes in the hydrology and sediment load downstream of the river, and floating aquatic vegetation will threaten the quality of the water and functioning of the turbines. It also increases the risk of transmission of diseases through the water.

Threats to migration The construction of the dam requires a deep, 40km long reservoir, which threatens the wildlife migration of the largest mammals, in particular the last population of 193 elephants in the Katanga region. There are plans to introduce another 400 elephants to the Lufira Valley, and within ten years, to also re-introduce rhino back into this area.

Fish migration in the Lufira River will also be impacted. The impacts of changes in the flow rate and sediment load in the extensive network of lakes into which the Lufira river runs, will have significant consequences for the livelihoods of local downstream communities who depend upon the fishing resources for their survival.

Carbon Emissions The Global Witness report states: "By submerging tracts of forest, the dam could increase overall emissions equivalent to 1.3 million tonnes of CO2 by the end of the century- more than the emissions created by burning 3 million barrels of oil, undermining the positive impact of what might otherwise appear a green, renewable project."

NGOs call for halt to illegal activities in national parks

More than 200 Congolese and international NGOs signed a letter calling for the Congolese government to clamp down on "illegal activities" in protected areas such as Upemba National Park, the Sombwe dam project was denounced as "directly threatening the security and integrity of the areas", and of local communities. Furthermore, Upemba National Park guards are already contending with a threat of violence as well as pressure from the local community who are asserting rights to hunt, fish and farm within Upemba and the construction of the Sombwe dam could exacerbate these challenges.

In September, Justicia produced a report warning of the negative impacts of Sombwe dam on the local community, stating that the project "risks depriving many people living in neighbouring territories of their main livelihood, which is fishing."

In a documentary broadcast by Deutsche Welle on 30th June 2019, Head of Kipay Energy, Eric Monga, discloses that after a trip to Florida, he has convinced investors to support the project, saying; "A contract has been signed, but that's all I can tell you." The video is available on YouTube (at 27 minutes). According to Global Witness, Kipay is seeking further investors for the project, which is to be 70 per cent financed through debt.

On 15 March 2021 the Congolese human rights group Justicia released a statement denouncing what it called “the manipulation of the population of Kyubo to attack ICCN officials and foreigners.”

The statement indicates that staff of the Congolese Institute for the Conservation of Nature, ICCN, have been attacked, and alleges that staff from Kipay Energy have paid local people to incentivise them to participate in the conflict, and organised demonstrations in favour of the dam construction and against the conservationists working to protect Upemba National Park. See additional reporting by Actualite.

The European Union, which funds some Congolese conservation efforts, has also criticised the construction of Sombwe dam within Upemba National Park as a potential violation of Congolese law. Global Witness reports that a letter from the EU ambassador to DRC's ICCN states that the "disregard for the national park status of the project site is an unacceptable omission" and Kipay's enviromental assessment was biased and presented "serious faults" and did not take into account the "potential permanent impacts of the dam (and) reservior."

According to the project sponsors, PowerChina and Kipay Investments, the project will cost USD 432 million. This will be funded with a debt-equity ratio of 70:30 - 70% from borrowing and 30% from the companies’ own capital. The debt portion, amounting to USD 302 million, will likely be provided as a project loan.

In a documentary broadcast by Deutsche Welle on 30th June 2019, Head of Kipay Energy, Eric Monga, discloses that after a trip to Florida, he has convinced investors to support the project, saying; "A contract has been signed, but that's all I can tell you." The video is available on YouTube (at 27 minutes). The investors are unknown.

The Global Witness Report Before the Flood (2021) includes some information about recent major financiers of PowerChina, included below

The Sombwe Dam is understood to be a joint venture owned 51% by PowerChina (Power Construction Corporation of China), via Sinohydro, and 49% by Kipay Investments.

Kipay Investments Congo, the Democratic Republic of the

Before the Flood: The dam that threatens one of Africa’s oldest national parks

From Virunga to Upemba: Keep Kipay Investments and PowerChina out of Upemba National Park! 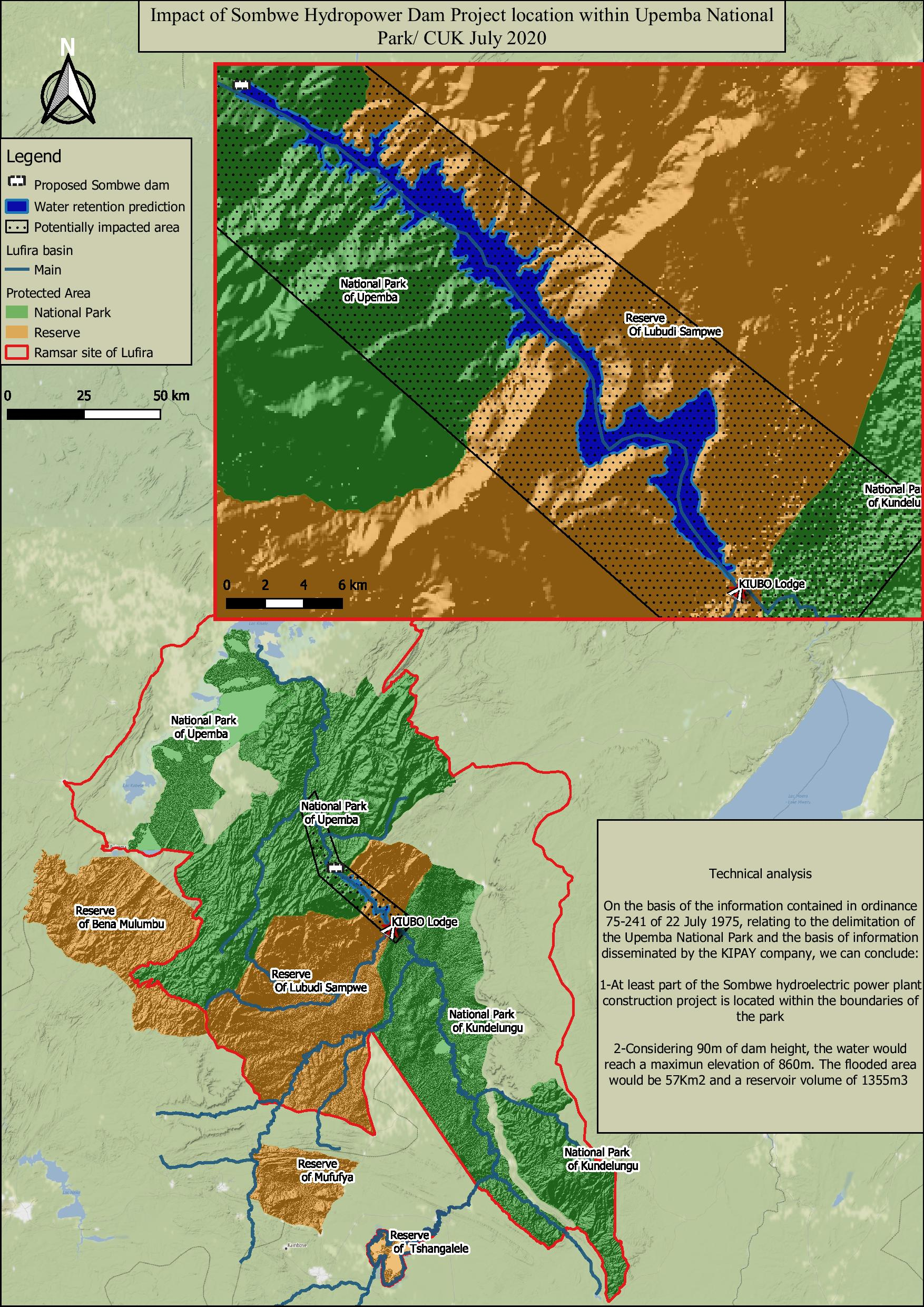 Construction of the Sombwe hydropower complex commenced on September 2016, when Kipay started to open a track at the Sombwe camp inside the Upemba National Park. Kipay's activities were illegal as they were inside the protected area which is in contravention of the nature conservation law 14/003. Despite this, the company continued its plans and in April 2019, Kipay announced a joint venture with PowerChina. In November 2019 construction of the hydroelectic power plant began. This construction is also illegal, since the construction is planned inside of a Congolese Protected Area (see “Issues”).