Home › Projects
Patents on chimpanzees and other animals - international -

This profile is no longer actively maintained, with the information now possibly out of date
Send feedback on this profile
Download as PDF By: BankTrack
Created before Nov 2016
Last update: 2016-09-06 00:45:27 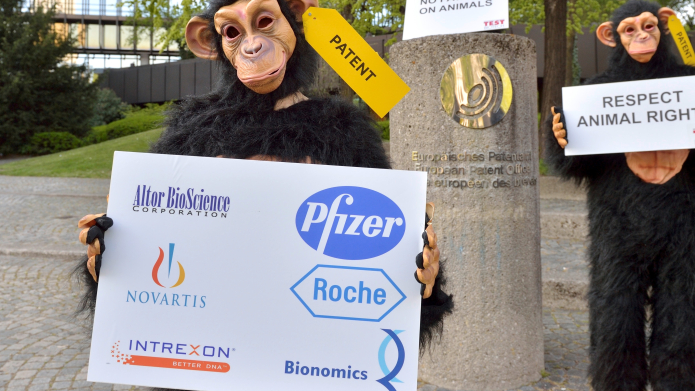 About Patents on chimpanzees and other animals

The European Patent Office (EPO) has, since 2010, granted five patents on chimpanzees to the companies Bionomics, Intrexon and Altor BioScience. The animals have been genetically engineered to e.g. develop cancer or epilepsy and are intended for use in animal experiments for pharmaceutical research.

In recent years, the number of patents on genetically engineered animals that have been applied for and granted by the European Patent Office (EPO), has increased significantly.

Out of the ten largest global pharmaceutical corporations, Hoffmann La-Roche (and its subsidiary Genentech), Pfizer and Novartis file the highest number of relevant patent applications. According to database research, they have each applied for around 100 to 400 patents that concern animals and the use of animals in experiments.

In the view of Testbiotech, patents on animals are unethical, particularly as they create an economic incentive for animal experiments without medical necessity. This runs counter to EU and national laws which aim to reduce the number ofanimal experiments.

As such, banks should make a clear statement in their corporate social responsibility guidelines saying that patents on animals are unethical and that they will not do business with companies that claim such patents. Banks should communicate this commitment to their business partners. This issue concerns any bank that entertains business relationships with the pharmaceutical sector, because patents on animals are widespread.

Patents were originally designed to reward technical inventions. However, animals and other living organisms are not human inventions and applying patents to them raises ethical questions.

Patents on animals provide commercial incentives that can lead to a substantial increase in animal experiments, without medical necessity. First because experiments are conducted prior to the patent applications, to prove that the 'invention' works. And then because there is economic pressure to market the patented animal within the period of 20 years while the patent is valid.

There is a huge gap between what might be considered as being necessary to achieve future medical benefit and the number of animal experiments being actually performed. Animal experiments have become a self purpose. In consequence, this development is in conflict with European animal welfare legislation which requires that animal experiments are reduced to what is absolutely necessary.

Jane Goodall, who studied chimpanzees in the wild for many years, comments: "While on the one hand protection of great apes gets more and more support in society, on the other hand the desire of some companies to patent chimpanzees, our closest living relatives, is a step in the opposite direction. It seems to me shocking that a company should consider a great ape as a mere technical tool. If we allow that in this day and age people in the future will look back and say: How could they?"

Uncategorised
shares/bonds underwriter or manager - JP Morgan acted as one of the dealer managers in an share exchange offer with Zoetis (animal health company)
source: Profundo 2015

Andreas von Planta has been a member of the Board of Directors of Novartis since 2006, qualifying as an independent Non-Executive Director. He is Chairman of the Risk Committee, and a member of the Audit and Compliance Committee, as well as the Governance, Nomination and Corporate Responsibilities Committee. At the same time he is the Chairman of the Board of HSBC Private Bank Suisse and HSBC Private Banking Holdings (Suisse), part of HSBC (United Kingdom). He has also been a member of the Board of Directors of Nationale Suisse (Schweizerische National Versicherungs Gesellschaft) since 1997, acting as Chairman since 2010. He continued in this role after the completion of the takeover of Nationale Suisse by Swiss insurance company Helvetia in 2014. (Profundo 2015)

William T. Winters, a member of the Novartis Board of Directors since 2013 and current member of the Compensation Committee served as co-CEO of JPMorgan's investment banking business from 2003 to 2010.

- The company has been granted patent EP1409646 claiming chimpanzees with a genetically engineered immune system. The patent was [partially] revoked in opposition procedures in July 2015.

- Genetech considers itself the “founder of the industry” and is now a daughter-company of Hoffmann La-Roche. The company has more than 400 patent applications which claim genetically modified animals and/or the use of such animals in experiments.

- This major pharmaceutical company has applied for about 100 patents which claim genetically modified animals and/or the use of such animals in experiments.

- The company has been granted patents EP 1456346 and EP 1572862 claiming chimpanzees genetically engineered with DNA stemming from insects. The company uses the methods of synthetic biology to radically change the genetic make-up of animals. According to their homepage, it is part of their business model to gain genetic control over all sorts of living organisms: "Intrexon applies novel proprietary platform technologies (...) enabling unprecedented control over cellular output and functions."

- Novartis is the world's largest pharmaceutical company and has about 200 patent aplications which claim genetically modified animals and/or the use of such animals in experiments.

- This major pharmaceutical company has applied for about 400 patents which claim genetically modified animals and/or the use of such animals in experiments.

Genetically engineered 'man made' mice sold at a discount

Who is investing in experiments with genetically engineered chimpanzees?

Letter from Testbiotech to Credit Suisse on Invitation to a conference in Berlin on patents on life, genetic engineering and animal welfare

Letter from Testbiotech to Deutsche Bank on Invitation to a conference in Berlin on patents on life, genetic engineering and animal welfare

Letter from Testbiotech to JP Morgan Chase on Invitation to a Testbiotech conference in Berlin on patents on life, genetic engineering and animal welfare

Letter from Testbiotech to Norwegian Pension Fund on Invitation to a Testbiotech conference on patents on life, genetic engineering and animal welfare

Letter from Testbiotech to UBS on Invitation to a Testbiotech conference on patents on life, genetic engineering and animal welfare

Legal opposition against patents on chimpanzees

Patents on chimpanzees are the tip of an iceberg of more than 1500 patents on animals that have been granted by the EPO. The authority started this practice in 1992 with the so-called "oncomouse" being the first patented animal.

Most of these patents cover a broad range of animals, with a typical patent covering e.g. "rats, mice, hamsters, guinea pigs, rabbits, dogs, cats, goats, sheep, pigs and non-human primates such as monkeys". While some of these "inventions" are to be used in agriculture, the vast majority is intended to be used as laboratory animals.

The organisation Testbiotech, together with other organisations, filed legal oppositions against the patents on chimpanzees in the years 2012 and 2013. These appeals are still pending. Full information, including the patents granted, the oppositions filed, information on the biotechnologial methods used, a petition as well as an open letter to investors, can be found on their website.