This profile is no longer actively maintained, with the information now possibly out of date
Send feedback on this profile
Download as PDF By: BankTrack
Created before Nov 2016
Last update: 2016-10-12 21:08:21 Contact:
Share this page: 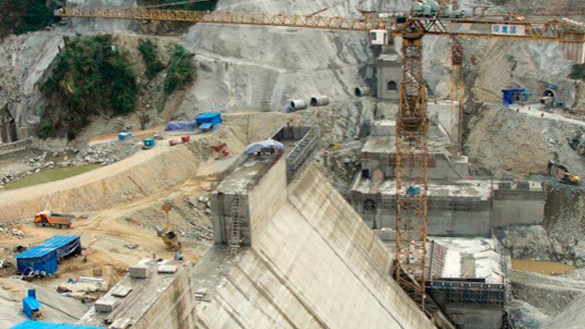 The Myitsone Hydroelectric Project is the largest of seven dams (total capacity 13,360MW) planned on the headwaters of the Irrawaddy (confluence of Mali Hka, and N’Mai Hka rivers) in Burma. The USD$3.6 billion project is located in an area recognized as one of the world’s eight hotspots of biodiversity, and will submerge “the birthplace of Burma” in local myths, including a number of historical churches and temples, and the sacred banyan tree. There are serious doubts about the quality and independence of the Environmental Impact Assessment for this mega-dam project, as well as concerns regarding the resettlement process and the role of the project in exacerbating the long-standing conflict between the ethnic Kachin people and the military government.

The project must be cancelled because of the local opposition and continued fighting caused by the project in Kachin State. There must be an independent and comprehensive investigation of the environmental and social impacts including downstream impacts, of the remaining 6 dams planned on the headwaters of the Irrawaddy River.

Thousands of people’s livelihoods are directly impacted by the Myitsone project. The government has underreported the number of people directly affected by the dam as few as 2146 people from five villages will be relocated to new homes. The number is far higher. As Aung San Suu Kyi explained in her Irrawaddy Appeal, 12,000 people from 63 villages will be relocated from the dam cascade project.

Even after the project was suspended, none of the more than 2000 residents who were forcibly relocated have been able to return to their original villages.

The dam will also dramatically change the ecosystem of the Irrawaddy River, impacting downstream communities, who depend on the rice paddy fields in the Irrawaddy Delta. The delta currently is home to two thirds of Burma’s rice production.

Indigenous people have not given their free, prior and informed consent for the Myitsone Dam project. All major Kachin ethnic organizations completely oppose the Myitsone dam project. In addition, the armed conflicts that the dam caused also threaten human security in the Kachin State. The irreversible change brought by the Myitsone dam has forced communities to give up their traditional livelihood and relocate.

Also impacted are the economic rights of downstream communities who depend on the rice paddy fields.

The Kachin Womens’ Association of Thailand has documented 32 cases of rape by Burma Army troops since fighting erupted at the dam site between the Kachin Independence Army and Burmese military troops.

The Irrawaddy has been under the ecological threats of rapid deforestation and erosion, unregulated gold mining and industrialization. Sandbank formation, saline intrusion, as well as water pollution has severely impacted the ecosystem around the river. Dams along the Irrawaddy will exacerbate many of the existing problems and the ability of the system to respond to climate change. The Myitsone project will also influence downstream flows of the Irrawaaddy, upon which downstream communities rely for rice production. The dam will prevent the seasonal migration of fish to their upstream spawning areas. Altered hydrology will disrupt the natural replenishment of nutrients. Since the project is located less than 100 kilometers from the earthquake prone Sagaing fault line, in the early stages of construction, there have been geological problems, including a tunnel collapse and seismic issues.

The Environmental Impact Assessment process for the Myitsone Project is problematic. There are no legal obligations to conduct EIAs in Burma. CPI funded and commissioned the Changjiang Institute of Survey, Planning, Design and Research (CISPDR) to conduct the EIA with Burmese experts from Biodiversity and Nature Conservation Association (BANCA). However, the study was concluded in five months rather than the usual period of seven months that are needed to finish a broader EIA. CPI published the EIA’s recommendations on its website, which are contradictory to the environmental baseline findings from Burmese experts. The Burmese experts recommended building two smaller hydropower dams to substitute the Myitsone dam, and to establish two national parks and additional measures to ensure that dam workers do not impact and destroy forests during construction. However, CPI did not wait for the EIA to be finalized before commencing construction and resettlement. Construction began in December 2009, three months before the final EIA was reportedly available to CPI in March 2010.

There has been long-standing conflict between the ethnic Kachin people and the military government of Burma. The tension and violence has worsened since construction began on the Myitsone dam. The Kachin Independent Organization believes that the dam constructions threaten the traditional livelihoods of the Kachin people. They also believe that the resettlement and relocation plans also serve the government’s interest to control the Kachin military forces. Failure to reach agreement on resettlement has led to a series of explosions since April 2010 and fighting erupted in June 2011, breaking a 17-year ceasefire and spreading to ten townships. Since the fighting erupted, widespread bombings including on the main supply route to the site, and clashes near the Myitsone Dam have caused over 20,000 Kachin State residents to flee to the Chinese border and to towns.

The profit of the project is to be shared between China and Burma. CPI has reported that about 90 percent of the electricity generated from the project will go to China. When the electricity is eventually transmitted to China, the Burmese regime will receive about 20 percent of the revenue, or USD$500 million annually. China will receive 70 percent of the annual profits, and the remaining 10 percent will be distributed as brokerage fees. The top benefactors are alleged to include Senior-General Than Shwe, First Vice-President ex-General Tin Aung Myint Oo, and Electric Power 1 Minister Zaw Min.

Although the project is currently suspended for five years, CPI has been pushing to start the project again. In April 2012, they wrote to the local Kachin organization requesting permission to bring 10,000 workers and materials to the Myistone Dam site as they intended to restart the project. The President has not lifted the suspension of construction on Myitsone Dam.

AWC is controlled by Stephen Law (Tun Myint Naing) and his family. Law's father, Lo Sit Han, the chairman of Asia World, has been labeled a "drug warlord" and linked to money laundering by the US government. The Law family is also very close to the current regime's Vice President, Thiha Thura Tin Aung Myint Oo.

CPI is one of the big five power producers of China, with nuclear, thermal, hydropower and coal power generation assets in China. Within the CPI Group, Yunnan Power Investment Co Ltd was created in December 2008 for the primary purpose of the development, construction and operation of the hydropower projects on the Irrawaddy River. This company is a holding company, wholly owned by China Power Investment.

It has a $75 million (480 million RMB) contract for concrete construction.

Sinohydro's Number 4 and 11 bureaus have contracts for road building and some civil engineering works.

Suspended Myitsone project will continue soon according to CPI Chairman

Provides a link to the environmental impact assessment regarding the Upper Reaches of the Ayeyawady River.
http://www.uachc.com/Liems/esite/content/showDetail.jsp?nid=6897&newtype_no=2248

In 2005, China Power Investment Corporation (CPI) and Asia World Company established a joint venture to build a cascade of seven hydropower projects (also known as the Upper Irrawaddy Cascade Project). On December 28th, 2006, MoU was signed between the Burma Ministry of Electric Power-1 and CPI and feasibility study was completed the following year. In 2009 Chinese and Burmese experts conducted an EIA special investigation on the Irrawaddy and finalized the report in March 2010. Since construction started in December 2009, explosions have occurred at the Dam site and fighting erupted on June 9th, 2011. However, full scale construction resumed in July. In August Ang San Suu Kyi published the Irrawaddy appeal, calling for the halt of the project. On September 30, 2011, the Burmese government decided to suspend the Myitsone Dam until 2015. However, there have been repeated attempts by the Chinese dam builder CPI to restart the project since the suspensive decision.