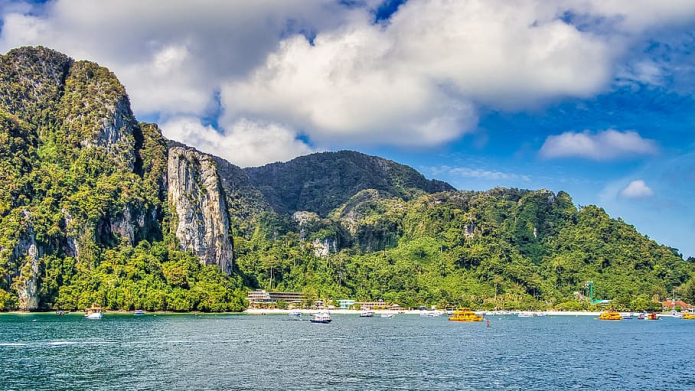 The 800 megawatt coal fired power plant proposed by the Thai government for the province of Krabi, on the west coast of southern Thailand, was supposed to be operative in 2019 but has been delayed several times. It is set to be located in the Nua Klong district, which is part of the Krabi Environment Protection Zone. The Krabi plant is one of nine coal-fired plants planned for southern Thailand to be constructed over the next two decades to offset the depletion of natural gas fields in the Gulf of Thailand.

The Thai government should withdraw its intentions to build this power plant and instead invest the USD 1.3 billion into sustainable, renewable energy solutions. Financial institutions should not finance this dodgy deal.

Activists and locals have protested for years against new coal plants in Thailand, and the Krabi coal power plant in particular. Villagers in the southern province of Krabi have come out in strong opposition to the planned project, saying it would cause pollution and pose a evere threat to the burgeoning tourist industry which thrives on the regions abundant natural beauty and generates billions in baht for local people each year.

Most of the Krabi community is familiar with the hidden costs of coal. A former coal mine remains side by side with a decommissioned coal-fired power plant, which poisoned the surrounding areas for over three decades. Locals speak freely about the legacy of coal in the polluted waterways, devastated fisheries, damaged farms, and unusually high concentrations of illnesses including upper respiratory tract infections. All of these have impoverished and weakened the community. Greenpeace collected testimonies of Krabi residents.

In 2001 the estuary of the Krabi river was listed as a wetland of international importance under the Ramsar Convention. The estuary, an area of 21,300 hectares, is formed by a complex of several rivers and dominated by mangrove forest and seagrass beds. The Krabi coal plant is slated to be built inside Thailand's largest seagrass ecosystem. The mangrove forests, sea-grass beds and coral reefs provide important sources of food for fish, spawning grounds and nurseries. The project will require to transport coal right through Ko Lanta & Ko Phi Phi National Marine Parks, ruining fragile eco-systems, coral reefs and rainforests.

In the case of Krabi, the public scoping has been deeply flawed and much criticized. This scoping did not include a health impact assessment or an evaluation of the economic value of Krabi River Estuary and marine biodiversity in the region, it also failed to evaluate the project's impact on people's livelihood and local tourism.

The output of the public scoping did not reflect the real situation, nor did it address the environmental, health and livelihood concerns of potentially affected communities. The Environment and Health Impact Assessment (EHIA) examines only a 5 kilometers radius around the project, as the area of study. Many people live further away from the project, and are likely to also be affected. Particularly when a power plant or other industrial project is situated along a waterbody, especially one close to the sea.

The development of two coal-fired power plants in two southern provinces may again be delayed until the end of this year because of the coronavirus pandemic.

The plan for the two plants has been postponed several times, primarily through 2014-17.

Protesters against a coal-fired power plant in Krabi and Songkhla called off their rally in front of the United Nations office in Bangkok on Tuesday after the Energy Ministry agreed to conduct a fresh impact assessment. Under the agreement, Egat will withdraw its environmental health impact assessment (EHIA) for coal-fired power plant projects in the southern provinces of Krabi and Songkhla. The Energy Ministry will conduct a new strategic environmental assessment to determine whether the plants should be built (The Bangkok Post).

The government decided on Friday to proceed with a planned 800-megawatt coal-fired power plant in the southern province of Krabi, overriding vigorous and widespread objections. The project's opponents vowed to expand their protests after approval was announced, and tried unsuccessfully to enter Government House. The Electricity Generating Authority of Thailand plans to build the plant in Nua Khlong district of Krabi (source The Bangkok Post).

A consortium of France's Alstom Power Systems and Japanese trading house Marubeni lost out on the project in July to Power Construction Corp. of China and a Thai partner. The bid amounted to THB 32 billion. Read more here.

This is the second time that the government envisages alternative plans "in case Krabi's coal-fired power plant cannot go ahead". This time eyes are on gas as a possible source of electricity generation.

EGCO, Thailand's second-biggest private power producer, has prepared an area for another plant in case the Krabi proposal gives way to villagers' opposition. The power plant would generate 900 MW of power for the region and cost about THB70 billion.

The project is discussed by a committee, consisting of the Energy Ministry, Krabi business sector, and civic groups, after environmental activists and local communities staged a huge protest outside Government House.

Two consortiums submitted their bids to EGAT for the construction of a coal-fired power plant in Krabi province. The two bidders are Italian-Thai Development Corporation together with the Power Construction Corporation of China and another consortium consisting of Alstom (France) and Marubeni (Japan).

As the the previous EHIA was severely criticized, EGAT submitted a revised report to ONEP's (Office of Natural Resources and Environmental Policy and Planning).

Greenpeace South East Asia publishes an extensive report called: Krabi at the crossroads. Dirty coal vs. clean renewable energy. In this report it recommends the Thai government to stop pursuing the ill-advised and destructive coal-power project at Krabi, to preserve Thailand's fragile wetlands and the rich marine environments on which millions of Thais depend.

Like Coal? Put it in your own backyard then

Krabi at the crossroads. Dirty coal vs. clean renewable energy.

The project has been initiated by EGAT (Electric Generating Agency of Thailand) in 2014. Plans include establishing a port (Ban Klong Rua) as means of transporting coal from Indonesia, Australia and Africa to this plant. The plant was supposed to be operative in 2019 but plans have been put on hold until completion of new Environmental Impact Assessment.

Alstom Power Systems and Marubeni and the consortium of Power Construction Corp. of China and Italian-Thai Development have both put forward bid submissions for a proposed construction worth TBH 48 billion (approximately US$1.3 billion).