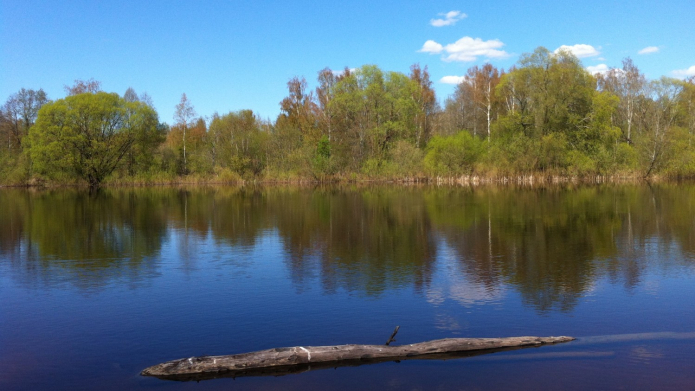 Emajogi River (Tartu area Estonia) a large part of which is protected as a Natura2000 site. Photo: Keith Ruffles via Wikimedia Commons (CC-BY-SA 3.0)

The Est-For pulp mill project in Estonia is a planned biorefinery that will produce energy and pulp, projected to launch production in 2022. It would have a production capacity of up to 700,000 tons of pulp annually, which would require an input of three million cubic meters of pulpwood and wood chip each year; an enormous amount in the Estonian context. The project developers state that the project would source timber from "existing wood flow", however forests in Estonia are already overexploited, and there is no commitment to use timber from credibly certified sources.

Wood supply would primarily come from within Estonia, with additional sourcing from Latvia or Lithuania if necessary. The project requires an investment of EUR 1 billion.

Banks and other financiers should ensure a comprehensive set of safeguards is in place before considering finance for any mil project.  These should cover all of the requirements in Green Paper, Red Lines, and in the case of the Est-For mill should pay particular attention on the following issues.

The Emajõgi river provides recreation opportunities for a large area of Estonia, and is the basis for a growing eco-tourism industry that mostly benefits local communities. Many eco-tourism companies have expressed their concerns over impacts on the river health and from increased logging.

In December 2017, the Estonian Fishermen's Community issued a very detailed statement, expressing opposition to the mill, due the high pollution it would cause to the Emajõgi river.

Forest management
The project's size is enormous not only by Estonian standards. The Est-For pulp mill will require 3,000,000 cubic meters of pine, spruce or birch wood each year - almost a third of total timber felled in the country each year. Timber will be mainly purchased from Estonia and partly from Latvia. The project developers state that the project would source timber from "existing wood flow", however forests in Estonia and Latvia are already overexploited, there is no commitment to use timber from credibly certified sources (FSC), and as such the project is expected to add to these problem.

The way Estonia manages its forests is currently at a point where environmental organisations on one side and the state and private forest owners on the other disagree on what the maximum logging volume should be. EKO (Environmental Council of NGOs) claimes that "the state had no idea what the logging volume of the current year would eventually be, and had not made any efforts to effectively limit logging volumes. The state had no sufficient overview of the industry either. Surveys had already shown that the current disorganized approach negatively affected the forests and the habitats it provided to the local fauna."

A new large consumer of forest resources like the planned pulp mill would worsen the current situation. Before the next large investments, measures needed to be taken to guarantee a sustainable use of Estonia's forests, including the appropriate legal measures. A recent OECD report recommended: “Encourage sustainable forestry management, including by limiting the intensity of forest use, and disseminating knowledge on sustainable forestry practices among private forest owners.”

In 2016 a study on Fungal Ecology was published suggesting that intensive management of Estonian forests, especially spruce dominated forests, poses a threat to rare wood inhabiting fungi. Furthermore, in the past years several changes to the Forest Act gave preference to those using timber industrially. The additional need for large volumes of timber will only worsen this process.

In 2016 a study was published suggesting that intensive management of Estonian forests, especially spruce dominated forests, poses a threat to rare wood-dwelling fungi.

Even more threatened is the flying squirrel (Pteromys volans L.)  The population of this rare mammal, whose habitat ranges from the Baltic Sea in the west to the Pacific coast in the east, is decreasing with every passing year. The Alutaguse forest district, in the north-east of the county, is the last permanent habitat of Estonia’s most endangered animal, These animals favour old growth forests, and they are seen as in indicator of the quality and health of the habitat. In the early 1990s, the habitat of flying squirrels covered 3180 square kilometres, but this has now shrunk to 550, a decrease of more than 80% over the last twenty years. There are currently less than 40 nesting places of flying squirrels left.

Birds also suffer from the consequences of intensive logging. In January 2017, the Estonian Ornithological Society warned that between 1984 and 2016, the abundance of forest-related species has decreased by an average of 60,000 bird pairs per year (0.5%), due to changes to forestry legislation and intensified forest management, leading to significant negative impacts on Estonian forests.

Water management
The mill will be built near the major Estonian river Emajõgi and will not use totally chlorine free technology (TCF), nor a closed water cycle, putting at risk local water ecosystems, which are already under severe stress. The mill will discharge a huge amount of effluents (1.2 % of the river flow), containing chloride, potassium, carbon, calcium and sulphate ions, threatening the credibility of national plans to reduce the river pollution to meet European Union requirements, and causing further harm to the lake’s ecosystem (source: Report of the National Audit of Estonia).

According to the TV station Pealtnägija show, the State Forest Agency RMK agreed with Est-For 15 years supply of timber. RMK was lead until December 2016 by an  Est-For investor, and father of Est-For representative, Mati Polli. He resigned just before the new mill project have been announced. According to the Pealtnägija show, the agreement between RMK and Est-For had been signed beforethe project was made public. It is not clear whether the deal had been initially agreed before or after Mati Polli’s resignation from RMK board, but critics note that in either case he could have had an undue influence.

In March 2018, the City Council of Tartu released a strong position statement opposing the project, drawn up by consensus by all political groups: "Due to the unlawfulness and questionability of current procedural steps, the implementation of a national special plan is forbidden and the procedure for the drawing up of a national special plan must be called off." Rural municipalities in Tartu County have voiced similar opinions, with seven out of its eight local governments following the city's move. The decision came after meetings with all stakeholders, including the company that is promoting the new mill. Despite strong local concerns, the government decided to move forward with the national designated spatial plan for the establishment of the infrastructure necessary for the operating of the Est-For pulp mill. The City Council of Tartu has announced that it will take action against that decision.

The Estonian government at its Thursday Cabinet meeting decided to initiate the termination of the national designated spatial plan for a planned €1 billion pulp mill in Southern Estonia. According to the government's decision, the circumstances that hinder the realisation of the plan have arrived aAnd are in complete opposition to the community, also highlighted by several legal disputes (Err.ee).

Documents in the possession of ETV's "Pealtnägija" show that the State Forest Management Centre (RMK) and pulp mill developer Est-For Invest concluded an advance agreement guaranteeing the yet-unbuilt mill half of the RMK's pulpwood over a 15-year period. Critics of the deal see this as a conflict of interest or even prohibited state aid (Err.ee).

Given the high amount of finance needed for this project (EUR 1 billion) it is expected that private sector banks will become involved.

Est-For Invest OU is the consortium that leads this project. It consists of the six companies listed under 'other companies'.

Environmental Paper Network is concerned about a huge biorefinery in Estonia

€1 billion pulp mill to be built near Tartu

University of Tartu, Faculty of Science and Technology, Institute of Ecology and Earth Sciences
2018-05-12 00:00:00
ngo documents

Estonian Fund for Nature report: Significant Threats to Construction of a Timber Refinery

Effectiveness of measures for improving the status of Lake Peipus

The investment group, Est-For Invest OU (Est-For), was established in 2016. Its owners include forest and wood-processing companies AS Lemeks, Caspar Re OU, Ivard OU, Kaamos Group OU, OU Combiwood and OU Tristafan. In January 2017 Est-For Invest submitted an application to the Ministry of Finance to initiate the planning process for the mill, with the potential location in Emajõgi river basin.