This profile is no longer actively maintained, with the information now possibly out of date
Send feedback on this profile
Download as PDF By: BankTrack
Created before Nov 2016
Last update: 2016-11-01 15:23:00 Contact: 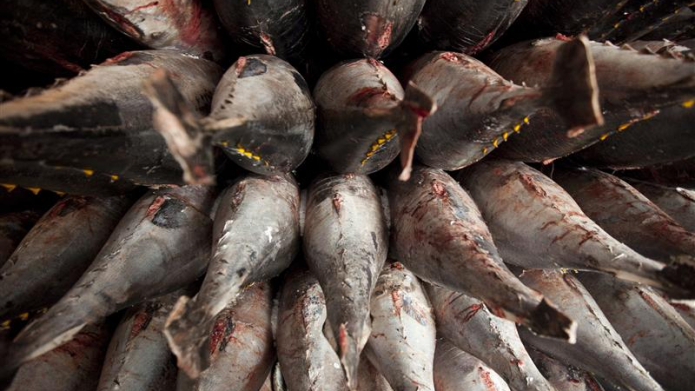 China Tuna Industry Group Holdings Ltd (CTI), the holding company of Dalian Ocean Fishing Co. Ltd., applied for an initial public offering (IPO) of its shares on the Hong Kong Stock Exchange in June 2014, aiming to raise up to US$150 million to expand its fishing fleet targeting high-grade bigeye tuna. The sole sponsor of the IPO was Deutsche Bank (Deutsche Securities Asia).

However, CTI's draft prospectus [see Documents] contained a series of material omissions, in particular relating to the health of the bigeye tuna in the Pacific Ocean, the main stock that the company targets. The latest scientific assessment by Western and Central Pacific Fisheries Commission (WCPFC) determined the bigeye tuna is now overfished, with stock at 16% of its original size - whereas the draft prospectus was using an outdated stock assessment data that indicated the bigeye tuna stock in the western and central Pacific ocean is at "a healthy level of abundance".

In addition, CTI admitted in the draft prospectus that the Chinese fleet, which the company is part of, has overfished its catch limits a number of times in the past years. But due to problems of enforcement, the company has never been penalised for exceeding those catch limits. CTI appears to be using the declared lack of mechanism for being pursued over excessive tuna catch as added bait for investors.

As of January 2015, Greenpeace has not received a relevant response to its above mentioned demands.

Other banks should not finance, or assist in finance, CTI until the company can address the environmental, social and governance issues of its tuna longline operations.

Due to the long period of sailing in the ocean, tuna longline industry has been plagues by labour law abuses involving captive crews, cruel punishments, and mental health problems for crew who, as the IPO document suggests, can be expected to spend up to three years at sea without making land. "Labour unrest, strikes or even mutinies, which may result from unsatisfied wage demands or other factors, could prevent or hinder our normal operating activities, and, if not resolved in a timely manner, could materially and adversely affect our business, financial condition and results of operation and prospects. These actions may be impossible for us to predict or control. In addition to physical demands, our crew members also face psychological pressure due to the difficulty of being away from shore for extended periods of time of up to three years..." (p41 of the draft prospectus). Such working conditions are especially prone to forced labour and human trafficking due to the difficulty in recruiting crew members (ILO, "Caught at sea: forced labour and trafficking in fisheries", 2013 (PDF)).

In general, the tuna fishing industry has high environmental impacts in both purse seine and longline fishing. Greenpeace has produced a report detailing the problems in tuna longline fishery. The report highlights issues that are endemic to this industry, such as fishery depletion, high levels of bycatch (including threatened sharks, turtle and seabird species) and high incidence of illegal, unregulated and unreported fishing.

CTI primarily fish for bigeye tuna in the Western and Central Pacific Ocean and Eastern Pacific Ocean and sell their catch to the Japanese sashimi market. There are major concerns about the health of bigeye tuna stocks. The latest scientific assessment, by the Scientific Committee of the Western and Central Pacific Fisheries Commission (WCPFC) shows that bigeye tuna is already overfished in these areas. Despite this, the CTI draft prospectus uses 2011 stock information, and quotes an industry association that describes the WCPO bigeye tuna stock as at "a healthy level of abundance". In Greenpeace's opinion, CTI provided potential investors with a false and optimistic view of bigeye tuna stock. Their proposed expansion, which could lead to an increase the number of vessels fishing for bigeye tuna further exacerbates the threat to this species and the ecosystem as a whole.

Greenpeace strongly believes investing in the CTI relies on a failure of regulation and governance that will lead to a complete depletion of the species.

In the CTI draft prospectus admits that the Chinese fleet has repeatedly violated the bigeye tuna catch limits allocated to China by the WCPFC. The company appears to be exploiting gaps in fisheries regulation, and basing its future revenue projection on the belief that neither the international community nor the Chinese government will improve their provisions on compliance, or impose sanctions on companies who ignore or break rules.

Given the scale of China's previous over-catches, and their already reduced bigeye longline catch limit for upcoming years, deductions could have a profound impact on the availability of future bigeye fishing opportunities for Chinese vessels, and consequently, the operations and profitability of companies like CTI.

Therefore, in Greenpeace's view, Chinese tuna companies are facing a future of either significantly reduced fishing opportunities, or complete defiance of international regulation. Both scenarios represent significant governance risks to potential investors, and raise serious integrity questions for those who support the company.

Deutsche Bank sponsored the IPO with the aim of raising up to US$150 million for CTI. From the limited information in the draft prospectus (much of the text is redacted), Greenpeace believe this was a bought-deal, under which Deutsche Securities Asia committed to buy any shares from the CTI that may not be sold during the IPO.

All such information are obtained from the draft prospectus, which can be found under Documents.

Greenpeace also wrote to the Chinese Ministry of Agriculture Bureau of Fisheries, to inquire about the operation of CTI. We received a response from the Bureau, stating their concerns on the inaccuracies of the draft prospectus, and that the Bureau has started their own investigation into CTI with the distant-water fisheries operations, and has ordered the suspension of the IPO on the Hong Kong Stock Exchange.

Greenpeace also reached out to Deutsche Bank, to raise its concerns about the environmental and social sustainability standards of the tuna longline industry, as well as raising questions on the Bank's internal risks assessment of the IPO which should have classified this deal as a high-impact transaction.