This profile is no longer actively maintained, with the information now possibly out of date
Send feedback on this profile
Download as PDF By: BankTrack
Created before Nov 2016
Last update: 2016-11-01 14:56:34 Contact: 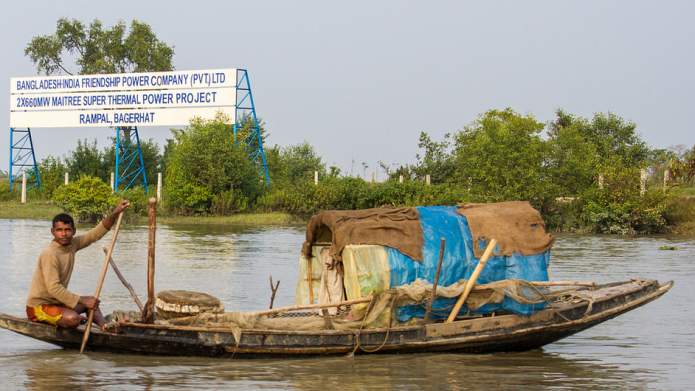 Bangladesh-India Friendship Power Company (Pvt.) Limited (BIFPCL/the Company) is a Joint Venture Company duly incorporated in Bangladesh under the Companies Act 1994 and was registered with the Office of the Registrar of Joint Stock Companies and Firms (RJSC), Dhaka, Bangladesh on 31 October 2012 vide the Certificate of Incorporation with Registration No. C-105370/12.

Main Objectives :
The main objectives for which the Company has been established are -

The proposed 1320 MW power plant project will cause irreparable damage to the livelihoods of 500,000 inhabitants depending on the Sundarbans; most rely on agriculture and shrimp cultivation, and fishing. All these livelihoods come under threat as the support infrastructure of the Rampal power plant has already been built.

The authorities in charge acquired the land necessary for the proposed coal plant before doing the Environment Impact Assessment (EIA) and getting the site clearance certificate from the Department of Environment (DoE). Local inhabitants were displaced in a very improper and dubious manner, without prior informed consent.

The most deadly impact will be on fisheries. The plant will discharge toxic water in the Passur River, and oil and chemical wastes from coal-carrying vessels will also contaminate the water. Mangrove-supported habitat will also suffer, and shrimp farms and homestead fishponds will be no exception.

In total 95 percent of the land acquired is agricultural land. The production of crops will be decreased down to zero as study shows that the fertility will start to reduce drastically as a result of coal related pollution from the very beginning of the plant operation.

The power plant will reduce the livestock grazing area, and the wastes from coal such as fly ashes and bottom ashes will contaminate air and water. This will make the livestock vulnerable to diseases and will affect the income level of households and farms simultaneously.

The air, odour and sound pollution will affect local inhabitants and cattle so badly that it will be hardly possible for people to live and cultivate. The inhabitants´ health is also likely to deteriorate.

The damage caused by installing and industrial site so close to the Sundarbans will leave the South Western coast of Bangladesh vulnerable to storm, cyclone, and other natural disasters.

The government displaced the local people, in many cases, without consent. The police and local thugs were involved in the process of forcefully displacing particularly the Hindu minority community from their homesteads. It is unclear whether the government properly compensated the landowners. "Long Live Sundarban" documentary depicts this aspect of human rights violation of the local people.

In the rural society of Bangladesh, women are the main agents for ensuring long-term survival and bondage of a family. They are also the major bread earners of many families. As the livelihood or home of a family gets threatened, women become the first victims to suffer and struggle to keep their families go on.

The Sundarbans are spread over the territory of Bangladesh and India. As the single largest mangrove forest in the world the area is extraordinarily rich in biodiversity. In 1997 UNESCO officially declared it a World Heritage site. The forest has shrunk down to one third of its size, now covering an area of 1,874 km².

According to the official Environmental Impact Assessment (EIA) for the proposed coal pant the enormous amount of hot water discharged daily to the Passur river, for at least 25 years, will severely pollute the water systems of the Sundarbans region and disturb fish migration and breeding due. Similarly the ashes emitted by the coal plant include hazardous chemicals such as lead, mercury, arsenic, radium, and sulfur. These gases will be spread out by wind and affect the people, trees, soil and livestock, extensively decrease land fertility and production over time.

Additionally, navigational vessels that will be traveling up and down the Passur river for coal transportation will also alter the ecosystem. Given the history of oil, fertilizer, coal vessels sinking in the rivers of Sundarbans, there is room for concern. These will most certainly harm the fragile ecosystem of the Sundarbans. And thus the people, the tigers, the dolphins, the turtles, the fish, the mangrove and the innumerable crucial organisms that keep the Sundarbans alive.

Moreover, the EIA document has many shortcomings, it remains very vague on many issues such as dealing of Possur River, zero discharge policy, mentioning the Sundarban as residential area and village rather than ‘environmentally sensitive area', millions of tons of fly ash and bottom ash issues, health hazards, dangerous waste management policy, coal transportation, among others.

NTPC's involvement in the power plant project of Bangladesh is more motivated by the commercial interest than by its own legal and ethical guidelines they follow while implementing such projects in India. According to the guideline of Indian Environment and Forest Ministry, it is not permitted to set up any such plant within 25 km vicinity of any protected forest.

In Bangladesh, the government persistently endorses the Rampal power plant as if there was no other option than the Rampal plant just beside the Sundarbans. No alternatives  are put forward to mitigate the power crisis.

There is a great imbalance in the gains and losses the Rampal project brings. The Bangladeshi cost of environmental degradation and loss of livelihoods will not necesarily be made even by a country-wide economic gain. Eventually if we want to see who is going to benefit from the economic growth, it is only those who can afford to pay for electricity.

Out of the three bidders, BHEL was formally announced as the operating company. This means it will have to arrange finance with Indian Exim Bank, the national ECA.

Crédit Agricole, Société Générale and BNP Paribas have said no to the Rampal coal power plant project in Bangladesh, reveals the Guardian in an article.

NTPC Limited and BPDB signed an MOU today in New Delhi for mutual co-operation for development of Power Sector in Bangladesh.

We must save Sundarbans: Big mistake for India

The India-Bangladesh Rampal Power Project Is A Waste Of Resources. Here's An Alternative

A Step Backward for Bangladesh

Rampal Power Plant: Indian bank urged not to finance it

Summary of independent expert analyses of the Rampal Power Plant