This profile is no longer actively maintained, with the information now possibly out of date
Send feedback on this profile
Download as PDF By: BankTrack
Created before Nov 2016
Last update: 2016-04-01 12:53:56 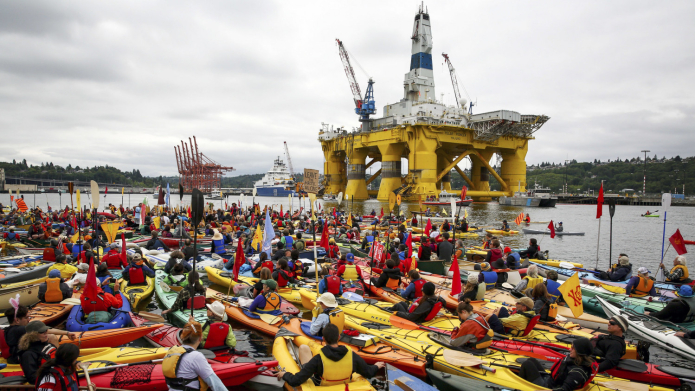 Royal Dutch Shell, established in 1907 and commonly known as Shell, is a British-Dutch oil and gas company headquartered in the Netherlands and incorporated in the United Kingdom. It is one of the oil and gas 'supermajors' and the third-largest company in the world measured by 2018 revenues (USD 388.4 billion). Shell produces 3.7 million barrels of oil each day, sells 71 million tonnes of LNG per year and has interests in 21 refineries. Shell has 5.147 billions barrels of oil equivalent in developed and undeveloped reserves (2018 Annual report).

Shell operates in upstream and downstream segments in over 70 countries on all continents. The company is active in liquefying and converting natural gas, extracting bitumen and developing wind power, as well as refining and distribution. An overview of Shell's largest projects can be accessed here.

In the last decade, Shell has invested heavily in the Arctic and sub-Arctic regions, including purchasing leases and pushing to drill exploration wells in the Beaufort and Chukchi seas and the Baffin Bay area. Shell's efforts have been beset by controversy, litigation, and a series of self-inflicted mishaps and accidents, all of which call into question these projects.

In 2013, Shell received a USD 390,000 penalty related to the grounding of the Kulluk Drilling Platfom in the Beaufort Sea, and environmental fines worth USD 710,000 from the EPA for the activities of their Noble Discoverer in the Chukchi Sea.

At Shell's 2013 annual general meeting, share-holders urged the company to reconsider its operations in Alaska. Critics doubted the company's ability to drill safely in the Arctic Ocean. Local Inuit communities backed these concerns, stating that oil spills could affect their food security.

Arctic drilling Shell has made headlines for its push to drill in Arctic waters. The company has spent approximately US$ 5,000 million since 2003, and it has yet to drill a single exploration well. Experts estimate that the U.S. Arctic Ocean contains more than 26 billion barrels of oil as well as plentiful natural gas, and Shell clearly sees expanding its operations in this area as an important part of the future.

The Arctic Ocean, however, is also a remote and difficult place to operate. Weather conditions can be unpredictable. Ice can hinder movements and make spill response impossible. There is limited infrastructure and a demonstrated lack of basic scientific information about the ocean ecosystem. In addition, there are local residents, many of whom identify as Alaska Native, who depend on the oceans for their cultural identify and physical well-being.

The result of Shell's push has been substantial controversy and litigation from Alaska Native and local government entities as well as local and national conservation organizations.

In addition, Shell has been beset by a series of mishaps and problems. The company lost control of its drill rig, the Kulluk, in difficult, but not unexpected, weather. The rig ran aground on December 31st, 2012, capping off a season of problems for the company. Shell also lost control of its other drilling vessel, the Noble Discoverer, and had a fire and was charged with violating safety and discharge requirements on that vessel.. Shell is currently dry towing both the Kulluk and Discoverer to Asia for repairs. In addition, Shell violated the terms of its Clean Air Act permits, had its containment dome fail spectacularly when tested in calm waters, and is under investigation by several federal agencies. Together, these failures call into significant question Shell's ability to operate in the Arctic.

A study conducted by the Climate Accountability Institute ranked Shell sixth in attributable worldwide carbon dioxide and methane emissions compared to global totals between 1751 and 2010.

Shell is largely responsible for the millions of barrels of oil spilled in Nigeria since the 1950's. Re-current oil spills have brought disastrous consequences to inhabitants, wildlife, and the environment. Most of the leaks in the Niger Delta are due to poor maintenance (corrosion, warn-out materials, etc.) and inadequate security around the pipelines (which run uncovered through villages). Shell blames the majority of spills on sabotage by oil thieves. However, organizations like Amnesty International and Friends of the Earth International have concluded that Shell exaggerated and substantiated this claim through flawed internal investigations in order to skirt responsibility for spills.

On 30 January 2013, a Dutch judge ruled in favor of four Nigerian farmers and Friends of the Earth Netherlands in their joint case - lodged in 2008 - against Shell Nigeria and its parent company Royal Dutch Shell. The court found Shell guilty of negligence and ordered the company to compensate residents in one of three affected villages that suffered severe oil contamination due to its operations. However, the court failed to hold Royal Dutch Shell accountable for the actions of its subsidiary, Shell Nigeria, in two accompanying cases concerning affected communities. Friends of the Earth Netherlands filed appeals to these decisions in May 2013. The European Commission is currently inves-tigating Shell over allegations of oil price manipulation. Investigators suspect that Shell has been manipulating trade in spot and futures markets since 2002 by reporting false and/or misleading oil trade information. The EC believes that several companies cooperated to manipulate oil prices in violation of European anti-trust laws. This manipulation could potentially have had a "huge impact" on oil and petrol prices.

The Brazilian Ministry of Labour and several workers' associations filed a lawsuit against Shell Brazil and BASF in 2007. The plaintiffs alleged that Shell and BASF were responsible for a spike in cancer rates among workers employed at, and residents living near the companies' pesticide plant. Workers and residents suffered from increased rates of cancers and other severe health problems due to land and groundwater contamination around the plant. After 6 years of litigations, Shell and BASF were found guilty and ordered to pay the medical fees of all of its former employees and their families. The parties agreed on a final settlement of about €240 million in March 2013.

The Nigerian government uncovered evidence pointing to Eni and Shell's involvement in a corruption scandal concerning their acquisition of the offshore OPL245 oil block. An investigation by Nigeria's Economic and Financial Crimes Commis-sion uncovered fraudulent dealings, however, high-ranking officials have discouraged further investiga-tion into the matter.

As part of an ongoing crackdown on tax evasion, Indian authorities have sent notices to several multinational companies, including Shell, demanding they pay more taxes. Authorities claim the companies undervalued transactions ranging from share transfers to sales. In 2010, Shell was excluded from the Dow Jones Sustainability Index because of their continued oil pollution in Nigeria. Similarly, TRIODOS excluded Shell from their investments due to Shell's ongoing human rights abuses in the region.

oil and gas
There are no projects active for Royal Dutch Shell now.
on record

Revealed: the 20 firms behind a third of all carbon emissions

Out in the cold