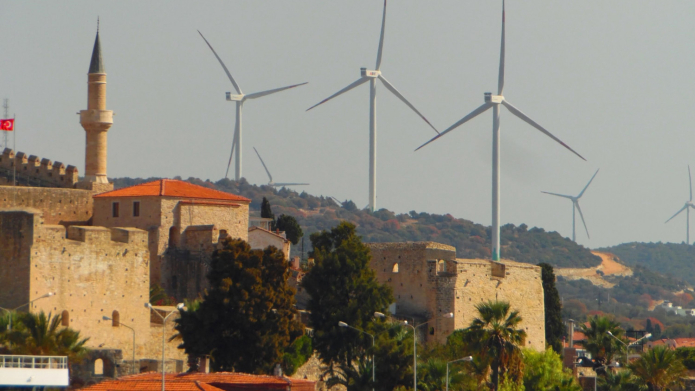 The ABK Cesme Wind energy project in Turkey consists of six wind turbines, each 150 metres high, with a capacity of 18MW. The project was initiated by Turkish energy company ABK Energy in May 2015 and required an investment of EUR 24 million. German company Nordex SE supplied the wind turbines. These turbines are located within the residential areas of the Cesme village, as close as 300 metres to people's homes. The project was implemented without consulting local people, landowners, interested NGOs, tourist dependant local businessmen, nor farmers.

The ABK Cesme Wind energy project has been implemented with a total disregard for the local people, the local economy, culture and history, the Cesme region's special micro climate and agriculture and the environment.

The court verdicts should be implemented, the area restored and the deeds transferred back to their real owners.

Expropriation, land rights, community consent No consultations with the local stakeholders during the planning and certification process have been undertaken. Many landowners were informed first when the construction machines were on their private property, others even after construction was completed.

Harassment of people opposing the project The ABK Wind Energy Project in Çeşme has been the subject of strong opposition from local people and affected landowners. The company responded, including:

A 2017 Germanwatch-Misereor report on Germany's energy sector and human rights stated on the ABK Cesme Wind Power-Nordex SE project that, 'Livelihoods are threatened by the destruction of vital natural resources (soils,water etc.)' and that 'the German National Contact Point partially accepted only one complaint – against Nordex SE – concerning a wind farm in Turkey. In the course of the mediation procedure Nordex agreed to improve its due diligence process. This pledge relates to future cases, however, whereas the concerns of those directly affected in this specific case were not dealt with adequately.'

Effects on local species An ornithological report (2012) by the Akdeniz University stated that, “It is inevitable that the turbines to be constructed in the area will directly and indirectly affect the living and inanimate beings around them.” The report further mentioned that, "Facilities that have a direct relationship with soil, vegetation and wildlife will also partially affect habitat use of native bird species that use the site as a habitat. Of the 79 bird species identified in the area, 21 are native."

International studies have shown that revolving wind turbines kill substantial numbers of migrating and resident birds. The existence of huge wind turbines in such a small area will have a significant effect on the unique microclimate, potentially endangering local endemic species (Cesme Platformu).

Environmental Impact Assessment (EIA) No environmental impact assessment study was required for the development of this project in this extremely sensitive environment. The project was issued an 'EIA report not required' in 2008. A case against this decision was filed in 2014 at the Administrative court in Izmir, which rejected the need of an EIA. The verdict was opposed at the Supreme court in Ankara, that ruled that an EIA is needed. For five years the EIA case has been prolonged until June 2019.

On 30 April 2019, Madeleine Staaf Kura submitted a letter requesting an official grievance be raised against a registered Gold Standard project - Çeşme Wind Power Project in Turkey. The complainant alleged that the project developer had not adhered to Gold standard principles during the implementation and operation phase of the project activity and had submitted to Register the project using misleading information.

Judiciary said to stop but wind power is still in operation

Germany, You Should Be Proud!

In 2013 the agreement between ABK Energy and German turbine supplier Nordex SE was signed and financially secured by the German Export Credit Agency, Euler Hermes.

In January 2014 ABK Energy started the construction of the Cesme Wind energy project on private and public land without legally having the project area in its possession.

Local people filed court cases regarding expropriation, the energy license, the planning and the Environmental Impact Asessment at the Supreme Court in Ankara, the Administrative Court in Izmır and the Local Court in Cesme. Construction continued during these court cases.

In January 2014 the project received a stoporder from the Supreme Court of the Republic of Turkey. In 2018 both the expropriation and the planning decisions were cancelled. It has also been ruled that this project is not in the “public good and interest.”