This profile is no longer actively maintained, with the information now possibly out of date
Send feedback on this profile
Download as PDF By: BankTrack
Created before Nov 2016
Last update: 2016-03-27 00:00:00 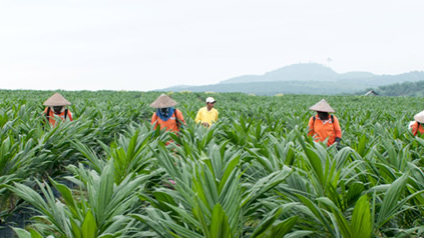 Bumitama Agri Ltd. is one of the largest producers of Palm oil and Palm Kernel in Indonesia, where it controls over 200.000 hectares of palm oil plantations. It was established in 1996 by the Harita Group, a mining business conglomerate created by billionaire Lim Hariyanto. Its first operations were in Central Kalimantan, which it later expanded to West Kalimantan and Riau. In 2011 it sold 56,8% of its production to Wilmar. As of 31 December 2014 Bumitama Agri owns and controls 199,242 hectares of land of which 153,268 hectares is planted.

Bumitama has repeatedly been found to be engaged in deforestation, including on orangutan habitat, as well as deforestation of peatland.

Bumitama has been a member of the Round table on Sustainable Palm Oil (RSPO) since 2007.

Since 1990, development of palm plantations by Bumitama and others has cleared about 16,000
square kilometers
of forested land in Kalimantan. In its Ladang Sawit Mas Plantation and its Gemilang Makmur Subur/Golden Youth Plantation, Bumitama operates with irregular permits. Its concessions overlap indigenous lands, forest reserves and contain pristine forest where orangutans live.

A complaint was filed at the RSPO and in response to that, in April 2013, Bumitama promised it would not clear land near forest reserves in West Kalimantan until studies were completed to appraise the land’s ecological importance. But it did clear 460 hectares, between May and September 2013. As of August 2013, and excluding the LSM concession, Bumitama exploits 7.305 ha outside location permits.

Major shareholder IOI is accused of illegaly clearing 10.000 ha and of developping plantations without approved Environmental Impact Assessments. By July 2014 there were five complaints filed against the company about violations of the RSPO Principles and Criteria, and one at the Dutch National Contact Point of the OECD. The RSPO Complaints Panel has confirmed that the company had been clearing land before carrying out the necessary HCV assessments. The panel noted that the noncompliant practices of Bumitama might be “systemic in nature.”

More recently, Bumitama has promised repeatedly to stop deforestation on its plantations, and it has set aside 11,000 hectares for conservation. It has also started working with the HCS assessor Ata Marie to determine what areas are eligible for development and what should be protected. As a result of this HCS pilot study, Bumitama announced in September 2014 that it would protect more than 13,000 ha of forest across five subsidiaries. However, the policy does not apply to all subsidiaries, or to third party suppliers.

In August 2015, Bumitama adopted its new sustainability policy in which it states  that Bumitama is committed to ensure that there will be no more planting on peatland regardless of depth, it will subscribe to the HCS approach, a zero-burning policy during land development and replanting, amongst other commitments.

Its subsidiary Gemilang Makmur Subur, operating in Central Kalimantan,  was found to be operating without any of the critically required national permits in violation of Indonesia’s Forestry Act, the Environmental Act, and the Plantation Act.

Bumitama divested all its assets from PT Hatiprima Agro in January 2015 following a court decision by the Supreme Court which decision states that HPA was required to sell of all of its assets to the new license holder, PT Langgeng Makmur Sejahtera. PT Hatiprima Agro had previously been subject to a court case as well as a RSPO complaint.

See The financing of Bumitama Agri for information updated until December 2015. See Friends of the Earth's report Commodity Crimes  for more details and for the reactions of some of the financial institutions involved.

There are no projects active for Bumitama now.
on record

Forest protection up in smoke

Publication initial assessment for Friends of the Earth/Milieudefensie - Rabobank

The financing of Bumitama Agri

Overview of five complaints to the RSPO

extracted from FoE complaint to the Dutch NCP of the OECD aigainst the Rabobank, regarding Bumitama
2014-07-05 00:00:00 | FoE, Milieudefensie
ngo documents

Friends of the Earth Europe page on Bumitama
http://www.foeeurope.org/Last-chance-financiers-palm-oil-companies-211113

Pictures of deforestation caused by Bumitama, from Greenpeace
http://photo.greenpeace.org/C.aspx?VP3=ViewBox&STID=27MZIF3ZW0QH&CT=Story

WALHI, Friends of the Earth, indonesia